Some thoughts about the decreasing position 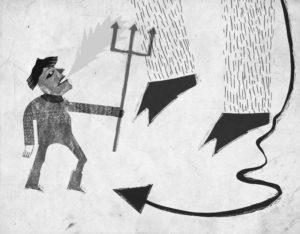 In a society where growth is perceived as the solution to all our ills and its absence is experienced as an always temporary failure of the system, where growing is assimilated to « continuing », those who refuse this model could only be perceived as heretics. The myth of growth, besides requiring a society organized in classes with the joint illusion of a porosity of their borders — the myth of the self-made man and of the « who wants can » -, a set of passive consumers and a division of the world into unequal zones playing different functions in the process of production/consumption, survives only thanks to the active participation of the greatest number. To register in opposition to this system, which is totally taking, is therefore inevitably to integrate a minority position.

But this minority status may or may not be accompanied by a sense of identity and associated collective belonging:
one can grow one’s own vegetable garden, reject all forms of consumerism, act in voluntary simplicity, challenge the myth of growth… without calling oneself « decreasing ». Without questioning the relevance of the fundamental postulates of degrowth, we can nevertheless question the deep subjective motivations that preside over the choice to call oneself « degrowth ». It is certain that the critical position with regard to the world in which we live can push us to unite with others who also think that « something is wrong » and reassure us that all thought is not dead. But acting « against » is not always harmless and sometimes meets other motivations than this first « gregarious » reaction.

The Other participates in the definition that one has of oneself: in the same way that growth is consubstantial with degrowth, the degrowing person does not exist, in this dimension of comparison, without the « growing » or « non-decreasing » person; social categorization is certainly inclusive on the one hand — it homogenizes the members of one’s own group in a collective identity of its own — but is, on the other hand, always exclusive — the members of the other group are « homogenized in radical heterogeneity(1) » . « The only evidence of « reality » that is important with respect to group characteristics is evidence of « social reality. » The characteristics of one’s own group (its status, its wealth or poverty, its skin color, its ability to achieve its goals) acquire meaning only in connection with the perceived differences with other groups and with their evaluative differences (…) the definition of a group (national, racial, or any other) has meaning only in relation to other groups(2). To call oneself a decreaser is therefore from the outset to « register against », to enter into opposition, whether one likes it or not.

Since degrowth only makes sense in the context of growth, it must remain a means and not an objective, otherwise it will only become, like all these mortifying institutions of capitalism, systems that do not fight, the product of a system that has acted from birth precisely to annihilate the autonomous capacities of thought. What do we do when faced with a child who, before the age of seven, will have spent the equivalent of a whole year in front of a screen? But what do we do when we have it in front of us as an adult(3) ?

This tendency to look for the subjective causes of individual choices in others, without perceiving the importance of the objective world in these choices, often goes hand in hand with the self-institutionalization of the critic as a « separate being ». As an objective observer, as an « outsider » to this society, he sees himself as protected from its influences, while he perceives the subject he is criticizing as solely responsible for his position. One thinks of what Orwell said: « Everyone recognizes, of course, as an undeniable fact the existence of class prejudice, but at the same time each individual, taken in isolation, believes that he is exempt from it by some inexplicable miracle (…).) it is not only the believing and practicing socialist, but every « intellectual » who believes that he, in any case, is above all that, that he, unlike his neighbor, has a mind mature enough not to be taken in by these lure mirrors which have a name: rank, title, wealth, etc.(4)  »

Certainly, the ambient conformism has something of revolting and, in front of a thinking adult, it is not always easy to understand all these indigent manifestations of the thought which give, sometimes, desire to stop any fight. Certainly, the mediocrity sometimes arouses some velléités of virulent contradiction and the recurrent sophisms of the envy of muzzling. But what do we know about what determined the subject to think as he thinks, and what, currently, imposes him to continue to think this way so that these choices and his way of life are not questioned ? It is always easier to think of ourselves as undetermined, under no influence other than that of our free will, than to seek to lift the veil on what we are. « The refusal to recognize a traumatic reality being in the measure of the defended interests, one understands the extreme violence of the reactions of resistance which arouse, among the holders of cultural capital, the analyses which bring to light the conditions of production

and reproduction denied by the culture: to people trained to think under the species of the unique and the innate, they make discover only the common and the acquired. In this case, self-knowledge is indeed, as Kant wanted, ‘a descent into hell(5) « .

There is probably little between this taste for the minority position and the desire for power. We should always ask ourselves this question: do we really want to see the disappearance of this form of society which at the same time gives us a distinctive dimension? « Any individual who really questions himself, must admit that he is an impostor. We all happily daub on the partiescularisms, but very few really want to abolish them. This brings us to the important fact that all revolutionary opinion derives part of its strength from the secret conviction that nothing can be changed(6) ». And what is valid for class particularisms and the real will to see them disappear can be applied to any struggle that explicitly carries within it a proposal for change.