September 11: the cancer of doubt 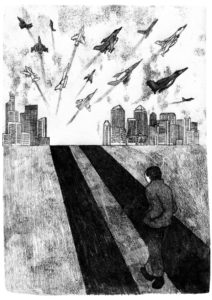 In a salutary little book entitled Elementary Principles of War Propaganda, the historian Anne Morelli recommends, with countless examples to support her point, to assiduously practice systematic doubt in the face of all governmental communication, whether in times of cold, hot or warm war. After the attacks of September 11, 2001, which prompted the West, and the United States in particular, to declare an indefinite and endless war on terrorism, this last notion takes on its full meaning. How can we deny that it is indeed in a communication of war, and consequently in propaganda, that the American authorities have poured from the day of the attacks? It is little remembered today that in the wake of 9/11, Defense Secretary Donald Rumsfeld created an « Office of Strategic Influence. (1) openly charged with designing and disseminating war propaganda that would give the United States an advantage in its ‘war on terror’.

However, in the case of September 11, much more than a duty or a necessity, doubt was very quickly imposed as a matter of course, so much so that all aspects of this historic event were likely to arouse suspicion. That this tragedy, beyond the shock it inflicted on a nation, came at the right time for some of its leaders, no one really doubts it yet. The direction of U.S. international policy after 9/11 resembled exactly what the heavyweights of the future Bush administration had outlined in the Project for the New American Century (2). Better still, the wars that resulted from the attacks were desired, even prepared, well before the event, as Paul Lannoye points out in his article. But from there to think that these same leaders would have allowed, favored, even partly organized this spectacular crime, there is a painful step, which it is advisable to consider well before eventually deciding to cross it.

Indeed, the implications of such a scenario would be so dizzying that some, consciously or not, refuse to even consider it. Without jumping to conclusions, it is useful to weigh the possible implications and evaluate them, like the scientist who formulates hypotheses, validates those that are verified and invalidates the others to build a theoretical model.

If a part of the American power has really been involved in this abomination, all the fine speeches about the export of democracy and the fight against dictators would be reduced to variable geometry bullshit that poorly hides a thirst for oil and geopolitical domination. But we were beginning to suspect that, even without the light of 9/11.

On the other hand, it could also mean that the United States needs enemies to perpetuate its domination and justify the model that underpins it, and that is shared by its many allies, especially in NATO. It would also imply that democracy as we know it is deeply flawed, and that a theater that plays with our lives is being staged by interests beyond our control. Ultimately, this would mean that those to whom we instinctively turn for safety in times of distress, our leaders, may be our enemies.

In view of the painful extent of these implications, it is vital to have the facts straight: if there is the slightest doubt, we must move heaven and earth to establish the truth. And unfortunately, doubts are legion. On the one hand, there are numerous precedents for false-banner or inside jobs operations, as the Swiss historian Daniele Ganser explains in this dossier, including and in particular on the part of democratic powers. There are also many factual inconsistencies or grey areas that remain in the official version of the attacks, as even some of its defenders admit. Finally, the doubt is also founded in view of the attitude of the American authorities, to whom the families of the victims and public opinion had to force the hand to obtain a late investigation, the result of which is, to say the least, indigent, as a majority of the members of the official Commission of Inquiry subsequently recognized.

Even if the doubt is unfounded, it has become a reality that reaches a substantial part of world opinion and democratic nations. Yet the trust that people place in the leaders they elect is by definition the very basis of a healthy democracy. This trust is currently seriously undermined by a whole series of recent events that make people doubt the democratic content of Western countries: proven lies about the motives of the war in Iraq and the following ones, ruinous bailouts of banks in crisis at the expense of the most basic social provisions, questioning of the very principles of the functioning of democracy in its Greek cradle — and tomorrow perhaps beyond — by the delegation of crucial decisions to non-elected bodies, and the list does not end there In today’s world, there is no shortage of reasons to distrust democratic governments. In this respect, it would be vital for them to begin to take into account the existence and extent of this mistrust, and to at least give the impression of a willingness to listen to it and to reduce it by pledges of good faith. However, particularly in the case of 9/11, the opposite is true. Legitimate doubt is systematically discredited, even ridiculed, and more generally, the resistance to the various democratic setbacks is criminalized to an increasing extent. It is worth noting that 9/11 marked the decline of the anti-globalization movement and the decline of individual freedom in the ‘free’ world. If we are no longer surprised to learn that the American NSA is to the East German Stasi what the TGV is to the bicycle, then the situation is serious.

Serious, but not desperate. The growing mistrust is also a sign of awakening, of an assumption of responsibility on the part of the public, who now demand accountability from the powers that be. The 9/11 skeptics, often referred to as ‘conspiracy theorists’, are not the enemies of democracy that some would have them be. Many of them only want to believe that the United States has been surprised by an attack on its soil, and beyond that, that democracy as we know it can still be saved. Simply, in view of the seriousness of the event and its implications, they ask that their questions be heard, and that they be provided with solid evidence that will remove any doubt. In the face of a crime that has set back world peace, democratic freedoms, and the prospects for the autonomous development of a whole series of countries, their claim does not seem extravagant.

Olivier Taymans, coordinator of the file