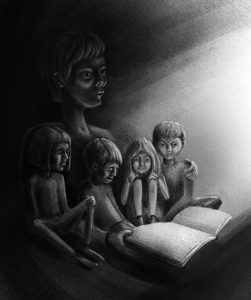 I believed in activism, I still do, but with a new lucidity brought by experience and current events. Depending on the individual, activism can mean : finding a meaning to one’s life, making social links, expressing one’s altruistic side, resisting ignominy and barbarism, for the positive side ; but it can also correspond to a way of passing the time « while waiting for better » (the couple, the marriage, the children, the professional situation or the great journey of one’s dreams), of sublimating one’s libido, of spreading one’s frustration and anger, of healing one’s complexes and childhood wounds, of manipulating one’s comrades, of lecturing to them, and even of attacking them without fearing a social, professional, legal, or physical backlash (since we are by essence non-violent) As for activism seen as an outlet for too much energy, it is neither negative nor positive in itself, but neutral. It all depends on what the energy is used for. Rosa Luxemburg, Augusto Pinochet, Nelson Mandela, Nicolas Sarkozy, Giovanni Falcone, Bart De Wever, Abbé Pierre, Bob Denard, etc., so many individuals with diverse backgrounds who have or had in common an enormous reserve of energy to serve their cause. As elsewhere, activism attracts a variety of psychological profiles, for better or for worse. However, it is not uncommon for it to undermine socio-diversity and metamorphose into a quasi-sectarian movement, even in the absence of a guru and financial motivation. It is enough to persuade oneself that one belongs to the camp of the Good and that one must eradicate that of the Evil by all means, or almost(1). Thus, one enters into religion, or worse, into a crusade.

In the 1990s, in Liege, I joined the Anti-Fascist Front (FAF), seduced by the nobility of the cause. AGIR, an extreme right-wing group, ran in the 1994 municipal elections. We had to react (no pun intended). The FAF went to heckle their private meetings and organized a large demonstration to their premises in the Outremeuse district, to boo them. A little later, we had joined the French antifascists of Ras l’Front in Strasbourg, all together against Jean-Marie Le Pen’s National Front, which promised to make a breakthrough in the European elections. All of this with a certain efficiency at the local level — the disappearance of AGIR after an electoral defeat — but less so at the European level since the FN still obtained 11 deputies. Already at that time I was not a supporter of charivaris in front of the neo-fascists’ premises, intuitively convinced, like Voltaire, that the best way to fight them is not to systematically prevent them from expressing themselves, nor to humiliate them, but to counteract their ideas with other ideas in the public space(2). Thus, we unconsciously fell into what we denounced, the anti-democratic actions. I also remember participating in a meeting where a seasoned « antifa » of French nationality harangued us with cookie-cutter formulas, expressed dogmatic views and took politically correct postures. Thus,  » for the sake of anti-racism « , he said, we were asked to  » always defend an immigrant or an allochthonous person, whatever the situation, on pain of playing into the hands of the fascists(3)  » [je souligne]. Any voter who voted for the extreme right, even for the first and perhaps only time, was considered a true fascist and therefore demonized. The nuances were not appropriate, because they certainly also played  » the game of the fascists « .

Logically, the FAF unconditionally supported the institutional political staff, as the strategy to counter the  » return of the foul beast  » demanded it. These antifas pretended to be unaware that these same politicians were zealously applying the neoliberal recipes that were manufacturing the far-right voter on the assembly line. Pragmatic, almost cynical! And on a micro-political level, some superiors could behave like ordinary fascists with their subordinates, the red triangle affixed to the lapel. Such hypocrisy disgusted me to the point that I finally tiptoed out of the FAF. I thought that, on the one hand, the fight against the neo-fascist nebula had to change its methods. On the other hand, that it was necessary to lucidly and courageously identify all the forms of extremism: the extreme right-wing movements and parties — the most visible, but which did not yet have political power at the time -, and all the policies of the extreme center, which have held power since 1979 with the arrival of the « witch » Margaret Thatcher at the head of the United Kingdom executive(4).

Some twenty years later, things have evolved and even degenerated, as far as sectarianism is concerned. In the meantime, the concept of « intersectionality » has emerged, which is a hit with young people (but not only). It is not only a question of bringing together all the struggles to bring down capitalism, without making idle distinctions. Thus, an attack on a butcher shop by vegans, the demand for PMA and GPA for all, a flash mob for climate justice, and the occupation of a striking factory to oppose relocation would all be successful tactics for undermining the system of oppression. Soon another step was to be taken: now, it is as if identity struggles had become a priority in the global plan of attack, as capitalism has taken on the hated face of patriarchy, considered the cause of the causes of humanity’s suffering since the appearance ofhomo sapiens sapiens. The anarchist Murray Bookchin recognized the role of patriarchy, but gave it no more importance than class exploitation, statism, greed, militarism and growth(5). The anthropologist Gerard Mendel noted at the end of his life that although the patriarchal structure still existed, it was no longer capable of being the source of authority(6). Waving it around like a bogeyman is tantamount to attacking in vain and without risk an institution that is now weakened, as is the Church(7) (so many  » specters « , as Max Stirner would have said). As Parts and Labour and Neil Postman before them have clearly seen(8), the source of authority these days comes from the technocrats who control the megamachine, who can sincerely proclaim their inclinations for feminism, gender theory, veganism, anti-speciesism… and transhumanism. In the summer of 2018, a reader of The Degrowth had taken offense that I was conflating, in my article « Our Catastrophe, an Indispensable Burden » (#131), the causes of LGBTQI+ and transhumanists, arguing that the latter was totalitarian in essence, unlike the former. However, there was no fantasy or doubtful amalgam on my part. Just ask around. For example, Randy Wicker (b. 1938), the leading pro-cloning activist in the United States and founder of humancloning.org, is also a veteran of the gay rights struggle.  » As far as the transgender community is concerned, what could be more transhuman than wanting to change one’s sex or, even more radically, to choose a new biological gender? (9) », argues the « radical democratic » transhumanist James Hughes, who effectively sees transsexuals as the  » shock troops of transhumanism(10) ». Another example? FM-2030(11) considered androgeny as one aspect of transhumanism. After this very brief investigation, we can already conclude that the border between the two movements is indeed porous. However, it would be enough for the LGBTQI+ milieu to officially distance itself from the transhumanists, if at least it has the will to do so… The definitive death of patriarchy and the rights of discriminated sexual minorities, is it worth biting into this poisonous fruit, and thus playing into the hands of transhumanist fascists(12) ?

Authentic resisters are now caught between two candidates competing for tyranny: the extreme political right(13) and techno-progressivism. Beyond the defense of its specificity, each one would ideally like to impose its model of society, the first one by the means of the elections to conquer the power; the second one by a political, legal and medialobbying , the first step of which is to silence dissenting voices(14)and thus to prevent freedom of expression, that freedom of expression that progressives now perniciously associate with thealt-right(15). Whoever wins, the result will be the same: totalitarianism, where the only freedom left is the freedom to consume. That’s quite a trick of history, isn’t it, Marxist friends?