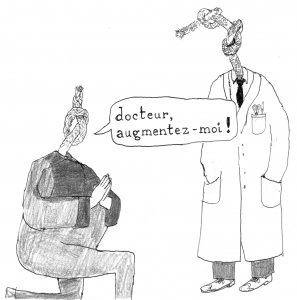 Visible on the Web since the middle of the previous decade, revealed by the extralucid activism of Pièces et Main d’Oeuvre(1), the file of transet posthumanism is the object of an intense editorial activity(2) from which I will select, quite subjectively, the recent essays (2018) of three philosophers, Mark Hunyadi (The time of post-humanism. An epochal diagnosis, Les Belles Lettres), Olivier Rey(Leurre et malheurs du transhumanisme, Desclée de Brouwer) and Michel Weber (Against transhumanist totalitarianism. The philosophical teachings of common senseFyp). In a first stage, the transhumanist doctrine recommends the physical and cognitive « augmentation » of the human being by the use of NBIC technologies, in other words nanotechnologies, biotechnologies, computer science and cognitive sciences, whose convergence is sought and scientifically feasible(3). In a second stage — warn the adepts of the technological Singularity(4) — humans will have to hybridize with machines, on pain of downgrading or even extinction. Its promoters, mainly located in Silicon Valley (but not only), benefit from the strong interest of the States and companies — hence a flood of public subsidies and private investments -, from the collusion of the media and from the fascination it has among the general public. It was necessary to put some weight in the other tray of the scale, which our three authors do masterfully, with their erudition and their sense of genealogy. Let’s look at it in detail.

As a philosopher of psychiatry (among others), our collaborator Michel Weber (born in 1963) had no trouble understanding the ins and outs of transhumanism. Contextualizing it in the global systemic crisis(5) allows to deflate its democratic and progressive pretensions(6): it  » has absolutely no meaning other than totalitarian in the context of a society in terminal crisis  » (p. 146). Driven by globalized financial capitalism, converging technologies could trap humanity in an invisible net from which it would be almost impossible to escape,  » a determinism [qui] would definitively evacuate all forms of spontaneity and, with it, all existential meaning  » (p. 55). The latest offshoots of consumerist and techno-scientific madness, transhumanist fantasies — not only to cure but to improve physically, mentally and morally, and even to immortalize — are at one with hyper-individualism and the war of the clones where  » each one wants, for himself, exactly the same thing as the other, while denying him the right to obtain it  » (p. 41). Because transhumanists hate our cosmic, animal, and political roots, their desire to transcend nature  » amounts to breaking with our biotope, that is, dying as a species coexisting synchronically and diachronically with all other life forms  » (p. 126).  » The truth of our existence is found in the organic, not in the mechanical, and even less in the hybrid  » (p. 124).

Two original remedies are proposed by Michel Weber. First, without dwelling on religion and morality, he writes, let us return to common sense, a faculty supposedly shared by all that  » expresses the obvious, in the form of the presuppositions of life and the teachings of evolution  » (p. 147). However, this common sense has been seriously altered in modernity by a crisis of the human perceptive community that we must now restore. Secondly, the search for modified states of consciousness and perfectibility is inherent to human nature. Spirituality and asceticism by the least allow to achieve this, benefiting, them, of a thousand-year-old experience accrediting their value. In a disenchanted context, let’s take an interest in shamanism, a kind of « cosmic therapy » which, although within the reach of everyone, requires an initiatory framework (let’s specify that it is in no way contradictory to common sense). However, the task will be difficult in the context of a hyper-individualistic dissociative society. In his conclusion, Michel Weber summons and compares the two authors of the twentieth century heralds of transhumanist folly: Aldous Huxley and George Orwell.

Professor at the University of Paris 1, Olivier Rey (born in 1964) admits that he has only recently become interested in transhumanism. But as the criticism of science has occupied him for a long time(7), it was necessary sooner or later that he attacked this big piece which represents the apotheosis of the techno-scientific utopia, apotheosis itself of the modern project of total control over the world. Transhumanists must be taken seriously as they seek to impose their agenda on humanity. If one can be skeptical about their practical intention — to succeed in developing all these science-fiction-like technologies — their cultural intention — to make the technological improvement of the human condition desirable — has already scored points.  » The loss of confidence in progress must be compensated for by an inflation of what it is supposed to bring: the worse the world goes and the more it threatens to collapse, the more it is necessary to wring support from this race to the abyss with exorbitant promises  » (p. 32). The transhumanist propaganda is well-tested and takes place in three stages. First, it impresses the public by highlighting the revolutionary, disruptive character of the techniques in question; then it reassures them by paradoxically affirming that these are only the normal extension of human progress. But  » to argue about the continuity of processes in order to make people accept without flinching the expected discontinuities of these same processes is a blatant dishonesty  » (p. 24); finally, there is no need to oppose it, the movement is irresistible and irreversible, whether we like it or not. Transhumanists talk more about future promises — especially in the field of health — to avoid describing in detail everything that is already being achieved in the (relative) secrecy of laboratories(8). Thus, medically assisted reproduction (MAP) has become a political and social reality in several countries. Olivier Rey insists on the loss of natural human capacities that would induce the transhumanist program, while it also suggests that it is, in the name of self-preservation, to adapt the human being to the difficult times that lie ahead, by radically modifying its nature.  » Things are bad enough without depriving ourselves of what makes them worse ‚ » he ironizes (p. 66).

Westerners have long been obsessed with machines, to the point of building them for anything and everything, and thus exploiting the world ever more frantically. But from now on, it is the body itself which is called to be « machinized » piece by piece, which raises some questions to this individual sovereignty on which insist besides the transhumanists.  » The dream of being augmented by technology seduces beings previously rendered infirm by that same technology  » (p. 90). Olivier Rey then shows that modern science is made to dominate life, not to serve or contemplate it, the words of Ernest Renan (1823–1892) being in this respect revealing(9). Transhumanism appears as the culmination of the humanism of the Enlightenment (Diderot, d’Alembert, Voltaire, Condorcet) and its beginnings (Bacon, Kepler, Galileo and Descartes) (10), these thinkers have each in their own way theorized the concept of progress and exalted the freedom and powers of man emancipated from nature and the Creator. It should not be surprising that this tyranny over an objectified nature threatens at the same time to subject human beings to the same procedures of objectification. In the 20th century, capitalism and communism shared this conception. In the long run, Olivier Rey foresees that the collapse of the thermo-industrial civilization will lead to the collapse of the transhumanist program, since  » its implementation implies that the world as we know it will endure  » (p. 171). Every cloud has a silver lining.

A former student of Jürgen Habermas and professor at UCLouvain, Mark Hunyadi (b. 1960) specializes in the critique of liberalism, already present in The tyranny of lifestyles. On the moral paradox of our time (The Waterfront, 2015), a remarkable short essay. Also enthusiastic, the new one places posthumanism(11) in relation to political and moral philosophy and makes it a symptom par excellence of the « little ethics » (12) of liberalism, the one that swears by the individual and fights to death against paternalism and ideologies. Whoever adheres to the digitalization of the world by enjoying its connected objects also participates in the advance of posthumanism, if only unwillingly. As a condition of the system’s domination, digital fragmentation separates uses from their systemic consequences: everyone appreciates the advantages brought by their smartphone without feeling the slightest scruple(13) to feed the Big Data ogre that will one day devour them. The posthumanist narrative, both evolutionary and moral, announces the possibility of technologically « augmenting » ourselves to achieve perfect health, sharpen our senses, increase our attention span and concentration, our intelligence, our self-confidence, and make us more generous; but is all of this just another individual freedom, or even a new moral right?  » Contrary to what the liberal vulgate claims, the freedom to increase oneself cannot be an individual freedom like any other, because it presupposes, in order to be able to be exercised, the setting up of the whole technical system that makes it possible  » (p. 62). It is thus at the price of collective servitude — well on the way to being rooted in robotic and tyrannical lifestyles — that a minority of techno-elects could afford (richly) the freedom (sic) to move to a higher stage (sic) of humanity. Since these aspirants are committed to the ideology of individual rights,  » posthumanism thus combines in the same movement […] a frenetic activism of oneself characteristic of the liberal individualism and the passive adhesion to a fatalism of system which results in the docile submission to modes of life not chosen  » (pp. 136–137).

Mark Hunyadi repeats here his thesis that lifestyles are the keystone of advanced capitalism, the keystone that must be addressed. He specifies that one can be technophile (which is his case) and opposed to posthumanism and technocracy, because it is essential to keep the political control of the reproduction and the changes of our societies, which implies to refuse their integral technologization and the « robot ideal » such as they are prophesied to us, at the same time as they are insidiously imposed, without possible alternative and as a fait accompli, by the entrepreneurs and engineers of GAFA(14) and NATU(15), to whom the politicians leave their hands free, when they do not give them a helping hand! However heroic they may be, individual acts of resistance will not get the better of this system as long as political institutions are not able to impulse another course of events that would sign the end of the technician hegemony imposing on individuals « . expectations of behaviour that make it increasingly difficult, indeed almost impossible, for them to escape  » (p. 139). Current policy approaches problems only through the lens of petty ethics, which sees everything in terms of individual freedom, security and the rights of the individual. The policy we are calling for would require a (relative) abandonment of calculation in favor of judgment and of « the right to be heard ». toorganize a common action  » that would urgently regulate the aims of technological development, for example by imposing a  » Sabbath on technique « , that is to say  » that man accepts not to do all that he could  » (p. 104). For  » the future is not indexed to technical progress  » (p. 164), or at least it should not be… Would we like to live in an « algorithmocracy »?