REALITY OF SQUATS IN BRUSSELS 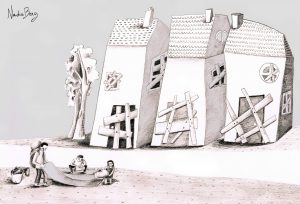 For this article I wanted to give the floor to people involved, in one way or another, in temporary occupation and squatting in Brussels. Due to lack of time and not knowing everything that is going on, far from it, the present overview is obviously partial and biased. Nevertheless, I wanted to testify to the current liveliness that I have observed in recent months. Let’s see how, in 2018, the advertising plays on the same heartstrings: website, sublime photos of Southeast Asian landscapes and this sentence:  » It is undoubtedly a desire to escape that led you to us. Our commitment is to make remote places accessible, to encourage encounters with the local population in order to taste authenticity (…) to allow us to insert ourselves into the human and geographical reality of the country without disturbing it « . An authenticity reserved for a privileged minority: 10 days for 2.219€ without air transport…

At a time when the oldest squat in Brussels, 123 (rue royale), is closing its doors after 11 years of occupation, everything remains to be done in a city with millions of unoccupied square meters and a continuous inflation of the rent.

In this context, various collectives are still seeking to inhabit these vacant spaces, with or without the prior agreement of the owner, with a view to signing, or not, a temporary occupation agreement. The right to housing, more or less demanded, remains nevertheless at the heart of the discussions. However, it is clear that in the race for convention and the resulting « asblisation » of « squatter » collectives, those who do not have the codes of the dominant class are less well off. Especially since the law criminalizing occupation without right or title is a sword of Damocles over the heads of those attacking the holy private property.

Finally, all this will perhaps be the subject of a later article written collectively. Let’s hear the testimonials.

Last October, a particular festival took place during ten days in Brussels: an inter-occupation festival. The term refers to empty spaces occupied by collectives. It includes both buildings that have occupancy agreements and those that do not. Initially, this inter-occupation festival was inspired by the festival of Ouvertures Utiles de Paris. This event, organized by the Parisian Intersquat for nearly 10 years, brings together for two weeks a set of squats, including cultural and artistic activities and moments of reflection on social issues.

In Brussels, the Powerful Cuckoo Festival took place from October 4 to 14. It brought together a dozen places, with the objective of creating links between the groups but also to be able to unveil this universe to an external public. The guideline of the festival was to be able to offer both artistic and cultural activities (concert, silk-screening, projection, handicrafts, etc.) and political activities (debate and discussion, meeting to prepare actions in the city).

The creation of this festival has an important background meaning. The Brussels occupations community is indeed caught in the middle of what can be called « the carrot and the stick ». A stick that gets tougher every year, which relates to a crackdown on occupations without an agreement reaching its peak with the law criminalizing squatting in November 2017. An ever more tempting carrot for occupiers seeking « legalization » through occupancy agreements. In the face of these « threats », it is important that the different places of occupation attached to the values of the squat (horizontality in the decision-making process, solidarity between the inhabitants, openness to the neighborhood, etc.) remain united and do not disintegrate to leave room only for « sanitized » places, purged of any militant, subversive aspect and bearer of the right to the city which is cruelly lacking in our capital.

One of the organizers

FESTIVE OPENING WITH THE VSP

This collective is facing great difficulties in finding housing. Until now, in the absence of any income, their only solution is to look for empty buildings and move in, without the prior agreement of the owner. A precarious solution that forces them to move every few months.

Until July 2017, entry into the empty buildings was done at night, in order to discreetly install as much stuff as possible before the police arrived. The presence of these personal objects demonstrated that the members of the collective had established their domicile in the property and prevented the police from proceeding with an eviction without a prior decision from the judge. However, this process was as risky as it was stressful.

So in July 2017, the collective changed its strategy: from now on, the moves to the empty buildings were done during the day in a festive, musical way and in the presence of many supporters.

The objective is twofold: on the one hand, to remind people that the installation of a hundred homeless people in a building that has been empty and unoccupied for several years is good news and that the right to private property is balanced by the right to housing. On the other hand, make sure that these moving moments are festive and joyful rather than risky and stressful. Indeed, the massive presence of supporters makes it virtually impossible for the police to evict them from the premises.

So far, this « festive opening » concept has made it possible to move into four different buildings in the middle of the day, without evicting the occupants by the police. Unfortunately, however, the occupations are always short-lived and it is necessary to regularly go in search of new buildings. To be continued.

The experience of occupying 136 rue Royale marks what we hope will be a beginning for the group of inhabitants concerned, who engage in a spontaneous and free occupation process. Beyond the interest we have in having a roof over our heads and living together, we demand the right to housing for all. To do this, solidarity measures are put in place for those who find themselves in an emergency, abandoned, in social insecurity.

The building was opened by a group in connection with the occupation of Royale Street 123, followed by the first part of future inhabitants who spent the night there during a pyjama party with a projection of a Japanese animation film. The next day at 10:30 a.m. on the 3rd floor, the first breakfast launched the morning meeting, an event that took place successively each day of the occupation. Starting the day with coffee to make decision-making moments more informal allowed residents to gather and newcomers to introduce themselves to the group.

The inhabitants who make up the group have therefore found each other in dribs and drabs. For some, coming to the occupation was a necessity, not a choice. The squat being the last chance before the street. For others, the occupation remains a social and political commitment, a means of direct action, an interface of encounters and a learning experience in contact with different realities. Everyone has different stories and backgrounds.

When a new occupation opens its doors, one of the main challenges is to gather all the different interests of the inhabitants, to put them on the table and to calibrate them all together in order to finally give meaning to living in a community. A mixed group like the one formed at 136 will encounter many divergent desires and wishes. Already, will we have to organize ourselves, give ourselves a structure? How big should the group be? What level of diversity do we want among us? Is our goal to house as many people as possible in an emergency, to live among ourselves while being inclusive and supportive, to open up to the neighborhood, or to provide space for workshops?

Occupations can transform forgotten places or places without history, into diverted places, rich in life, exchanges and sharing, places of infinite possibilities. However, it is not enough to open a building to be able to support an occupation. This one is not just a physical place, it is the group which impels the spirit. To do this, you must be willing to engage in dialogue. The values and themes to be addressed are often the key elements to be resolved so that the different positions found within the group can coexist. Between choosing and letting oneself be carried along, between radicalism and negotiation, between inclusion and selectivity, facing the hardness and complexity of the reality that surrounds us.

We don’t have a name yet, but the feeling of affection towards all the inhabitants is growing stronger by the day. We will continue to look for a place clean enough to live together, street people, former peasants, students, artists, architects, political refugees, undocumented migrants, passionate geologists, ex-queer activists, party musicians, cooks, vagabonds, activists, vacuum decorators… !

An occupant of the late 136

BRIEF FROM THE SQUAT COMMUNITY

We started squatting because we could no longer afford to pay rent to have a home. I was then a graduate, unemployed, without social assistance. I met other young people like me in political circles and we started looking for empty houses together. We found it quite quickly, because there is no lack of it in Brussels. After some research, we learned that the housing we were squatting in belonged to the CPAS, was managed by a Social Real Estate Agency (AIS) and had been empty for nearly 8 years. Other than the ripped up carpet and the broken water heater, the unit was in relatively good condition. From the beginning, we tried to contact the ISA to propose a renovation lease.

However, the only response we received was an eviction notice with a bill from the bailiff and an emergency appearance before the court of first instance, under the pretext of imminent works. That gave us 3 days to get out of there with all our stuff. The AIS knew well the procedure to accelerate the eviction because we were not the first squatters… nor the last! To this day, this house is still empty and no work has been done.

We started again elsewhere. At the same time, a long-standing desire was born: a social anarchist center had taken root in the premises of a disused factory a stone’s throw from the European Parliament. The place experienced an unprecedented effervescence, gathering day after day about fifty people at the general assemblies to organize a multitude of self-managed activities (table d’hôtes, artistic workshops, sports classes, political discussions, newspaper etc.). In the movement, we were also able to accommodate about thirty undocumented migrants who participated in the collective energy. It said a lot about the lack of political space for meeting, sharing, creation and expression in Brussels. But the authorities quickly put an end to the party, despite negotiations with the owners being well underway. They were forced to expel us, under orders from the State Security, because our presence was intolerable two weeks before the arrival of Barack Obama… After 2 months of occupation and intense activities, the self-managed social center was evicted by the police with violence and humiliation.

A few months later, the Parliament passed the anti-squat law. Today, faced with the criminalization of the squat, the successive evictions, the violence of repression and the exhaustion of starting over each time, we have given in to legal agreements, negotiating with private owners and institutions of power; those who perpetuate this world that hinders our autonomy and humiliates us daily. If we get reprieves to occupy derelict places, the joy is bitter. In exchange for some stability, we have to do some work in an old house, without hot water or heating…