As a representative of a young Brussels publishing house   carrying projects sometimes catalogued as « difficult » or « sharp » and often expensive,  we had taken steps to have some of these projects supported by the services of the Wallonia-Brussels Federation. It is within the framework of this research that we have  been able to learn about some particularly interesting facts. In front of the seriousness of some and the negligence of the global functioning, we have  then decided, rather than to register benignly in a framework which  seemed to us under many aspects aberrant, to denounce the errors of it. This was done by means of an open letter* to Minister Milquet, the content of which can be found in the following lines. 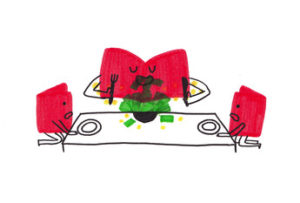 1. The activity report of the Comics Commission 2014stipulates that the commission granted a grant of 8,000 € for a « support to the publishing » of one of the books of the vice-president of the same commission. The same report mentions that an amount of €2,000 was allocated for « help with the translation » of another book by the same vice-president of the commission. While this vice-president is presented by name in this report as being part of a publishing house (a house in which some of her books are published), an aid of « support for publishing » of 3,500 € has been allocated to this same house. In addition, the two creation grants of €9,000 each, distributed that same year, were awarded to three author-publishers (each in different capacities) of this publishing house. Two of them were also members (substitute or not) of the same commission in the past. This situation is repeated — in other similar forms — in previous years. While it is difficult to find such a caricature of a situation, such clear cases of conflict of interest can be observed in other commissions. Let’s just mention — almost for fun — the example of the National Literature Fund, where 60% of the members of the commission were granted a grant by the same commission...

Author member of commission receiving aid, editor receiving others while he is a full member or substitute, etc… situations are not lacking where, in fine, the public money is distributed by who receives it…

While it is obvious that the line between judge and party should be made as clear as possible in the context of sound public management, these cardinal principles have been largely forgotten. Recalling the main principles would almost be a revolutionary posture:

No assistance shall be provided directly or indirectly to any committee member (alternate or otherwise) during the course of his/her duties.

Each commission should ensure that it has internal rules of procedure that specifically address instances of conflict of interest and the steps to be taken to resolve them.

In the event that a conflict arises, it must be clearly mentioned in the official reports, along with the measures adopted.

Many objections could be made to these simple measures of good practice: « Belgium is a small country », « We do not have such a large pool of specialists capable of giving relevant advice », « It is impossible to avoid any ‘inbreeding’  », etc… So many objections that function as oukases and have no other purpose than to confirm a mode of operation from which those who would formulate them currently benefit. 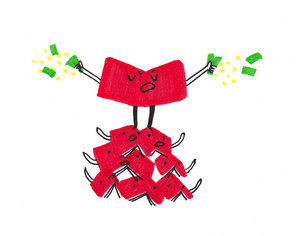 2. In Belgium, the publication of the accounts of companies and associations is mandatory. All aid from the Wallonia-Brussels Federation is conditional on the provision of the accounts of the organization that has benefited from it, so it goes without saying that no aid could be granted to a publishing house that does not publish its accounts. However, some publishing houses have — sometimes for ten years — not bothered to file these, either with the Registry of the Commercial Court (for associations), or with the National Bank (for companies)… while continuing to benefit from subsidies. This is not just a formalistic measure. Indeed, how can we claim to verify the use of a subsidy, when the accounts that should show it do not fully exist? A crunchy detail that demonstrates, by the absurd, the absence of an effective control: a publisher that has not published its accounts for two years has continued to benefit from subsidies… even though it was in a situation of bankruptcy.

3.Numerous provisions regulate the payment of aid, either through a specific agreement between the Wallonia-Brussels Federation and the publisher, or through a general charter to which all applicants must submit. The fact is that even though these provisions are issued by the public service, the latter often takes little care to ensure compliance.

The general charter requires the applicant publisher to use the services of a professional for dissemination and distribution. However, only four publishers receiving aid meet this requirement in the strict sense. While it is the founding role of the publisher to ensure the dissemination and distribution of its catalog. Making the author’s work known is its cardinal function. And if every publisher does not have the vocation to enter into diffusion and distribution in a large group, it must give guarantees in this respect to the subsidizing power. At the very least, it is up to them to ensure that the rules they set out are respected.

A minimum print run is sometimes applied. There are cases where these figures are not met by half. Without the amounts allocated being reduced (even though they are fixed on the basis of the draw!).

One of the main rules to which the publisher must submit is the scrupulous payment of royalties, which is obvious. Unfortunately, it appears that this is not always the case (a simple overview of the accounts — insofar as they are available — demonstrates this). If the rights of authors are not paid, the helps, them, continue to be paid…

4.While it seems to be fashionable to repeat over and over again that there is not enough money invested in culture — it is not our purpose here to take a position on this — it is a fact that many publishers receive considerable means (in view of this type of economy) from the Wallonia-Brussels Federation. Many of them come to receive (via conventions and/or more specific aids) enough to be able to assume, thanks to these aids alone, their entire mission. And this for many years. In addition, many publishers receive support from several FWB structures, as well as from others (WBI, municipalities, CNL, etc.). While it may indeed be interesting not to make culture dependent on purely material imperatives, it does not seem appropriate to us to automatically and indiscriminately distance it from them. As much the author, the artist, in his creative process, has legitimately need to be registered in a step requiring time and requiring an economic suspension, as much the publisher has for essential function to bring the work in a commercial fabric. By financing it entirely and structurally, if not its raison d’être, at least one of its founding values is removed. At the very least — and the preceding remarks demonstrate its inadequacy — any publisher funded to this extent by public money should be subject to effective control. Is it also normal that such important public financing — all things considered — can be devolved in a structural way (for a very long time for certain companies) to limited liability companies, whose objective, as their corporate name indicates, is to make a profit(1)…

5. It is no secret that printing in Belgium is more expensive than in other countries. Most of the subsidized Belgian publishers have taken note of this by outsourcing their printing work on a massive scale. While expenditure obligations are imposed in other sectors in FWB, no such obligations are in place in the publishing sector. Without this being seen as a desire for protectionism, why couldn’t we demand that part of the public aid be returned to this public? And that the printing in Belgium of a book helped in Belgium is thus promoted. All the more so since the reasons for these choices are mostly — sometimes under the guise of easy excuses — only cost-related. The cost of which we know is only the economic translation of social dumping. Moreover, without this type of measure, the blind allocation of a public subsidy to one sector weakens another equally precarious sector.

6.  All of the available agreements are based on quantitative targets. Clearly, a publisher receiving aid from the Wallonia-Brussels Federation is committed to publishing a certain number of titles per year. Notwithstanding some marginal adjustments to the objective (circulation, obligation sometimes to promote authors from the region, etc…), this recurring measure, set up as a principle, is the aberration itself. How can a cultural service be based on simple quantity objectives? How can you promote culture by forcing its operators to « make a profit »? While bookstores are besieged each year with an ever increasing number of increasingly dispensable titles, this aberrant vision of culture results in adding to the useless. Culture does not care about quantity. It is a matter of quality! No structural support should be given to a publisher. Only projects are expected to receive grants. And this on the basis of clear, detailed and well-founded opinions given by truly independent expert commissions — and this brings us back to point 1 -. The only possibility (guaranteed, there will never be) to see the emergence of a demanding and innovative culture.

Conflicts of interest, lack of serious control of what is done with the subsidies granted, abstruse criteria, erratic general operating mode, the situation is worrying. This is a simple, non-exhaustive transcription of elements that emerged from our sole search for information. These edifying examples are in no way the result of a long and difficult investigation. This makes the observation even more worrying.

Of course, the organization of public cultural aid is not an easy task. Supposed to guarantee culture the means to bring out new forms, the logic of this public aid rests precisely on the weakness of the system that institutes it. It is precisely because the majority does not buy creative works that this majority must imagine a system allowing them to exist. The organization of public aid, as an offshoot of the majority, is thus at the same time what reveals its flaws and sets out to fill them. And not content to act as a kind of defiance towards the majority from which it originates, the institution of public aid must also guarantee to this same majority the objectivity of its support to projects which, if they are truly innovative — and therefore deserve the subsidies granted — escape by definition the pre-existing criteria of this majority… Public cultural aid is thus by essence the theater of tug-of-war and dichotomies which complicate its implementation.

But it would be too easy to hide behind the imponderables of a system to excuse its drifts.

The public deserves a substantial and quality cultural investment. The cultural sector, which itself often gives lessons — and our open letter was perhaps another example — must not forget what, for whom and thanks to whom it fulfills its missions.

If not, we run the risk of becoming more and more separated from the reasons for which it was created.

*This letter, as well as the Minister’s response to it, and our response to the response are available on the website www.librairie-ptyx.be. For footnotes, please refer to the text on the site.