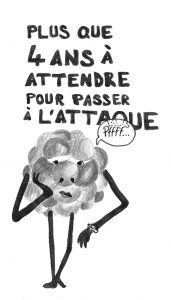 The speech of appeasement, according to which « there is no evidence to date that there will or will not be an increase in thyroid cancers among children in Fukushima Prefecture »(1)This is the same as the one defended by the official bodies, from the University of Fukushima to the government and the traditional media. To show you another position, we propose here a summary of a scientific article that dismantles the four central arguments deployed by the official discourse.

Following the disaster of March 11, 2011, a policy of systematic thyroid scans in children was implemented in areas affected by the radioactive release. The first findings, dated September 12, 2011, reported one case of cancer in 80,000 children scanned. At the end of 2014, there were 53 cases of cancer, 1 benign cancer, and 47 suspected cancer for a total of 103 out of 296026 children. The national average is 1 to 2 cases per million. However, the Fukushima University Hospital (FMU), through the voice of its director at the time, maintained that the results are not related to the effects of the disaster. Yamashita Shunichi — director of FMU from 2011 to 2013 — president of the Japanese Thyroid Foundation, which analyzed the effects on the thyroid in Ukraine following the Chernobyl disaster, is an « ideal » candidate, carrying scientific legitimacy who presents the following four arguments « as proven ‘facts’.

1st argument: the 4 years of incubation

Based on the experience of Chernobyl, the report of Yamashita Shunichi published on the website of the Japanese Atomic Energy Commission attests to certified detections of thyroid cancer in the Chernobyl area as follows: 1 occurrence in 1987; 4 in 1988 and 5 in 1989. Half of the cases concern adolescents and half children under 12 years of age. From 1990 onwards, the number of cases exploded to 15 before reaching a cruising speed of about 30 new detections per year on average and a peak of 66 in 1997. Cases are increasing among children who were over 5 years of age in 1986, but especially among those under 5 years of age. From this, it follows that nothing can be seen within 4 years of the disaster.

Yet this report leaves out two central elements. First of all, if there were some indications that the thyroid could be threatened, nothing was yet established: thyroid analyses in young children were not systematically done at that time. But above all, until 1990, the analyses were done by touch. The local medical authorities did not have adequate ultrasound equipment. This was achieved in the years 1989–1990 thanks to American donors. Four years later… The IAEA as well as the WHO finally acknowledged that there might be a link.

Unstoppable if given time to develop, the « scan effect » summarizes the increase in the number of traces of cancer detected as a result of the systematic thyroid scan campaigns in children. In other words, wherever you are, the more cancers you look for, the more you find. Classic of the genre, this argument was born in the middle of the Chernobyl storm. Moreover, maintain the official, given the number of new cancers detected per year in Japan (an average of 650,000), any new cancer detected is, statistically and at the national level, insignificant. One of the reports set up by the Ministry of the Environment in which Yamashita participated tends to prove that the occurrence of thyroid abnormalities in control groups in three remote provinces was not less than in Fukushima province. The study was based on youth aged 3 to 18 years. However, it has been proven that the thyroid is more fragile in women and in younger children, which the findings of this study dismiss. Adjusting for age, the results are more alarming, with one child out of 4,365 experiencing such concerns in the control provinces and one out of 1,633 in the most exposed areas of Fukushima(2).

Official records from Fukushima Prefecture, supported by FMU, suggest that exposure is lower than at Chernobyl and therefore not enough to endanger anyone. If the rate of millisieverts found in the body of inhabitants amounts to an average of 50mSv, well below the average of 500mSv perceived in some areas around Chernobyl, this is indeed the maximum threshold recognized as dangerous by the IAEA since 2011. As for the WHO, it mentions the figure of about ten mSv. Also, the above mentioned survey was conducted by Tokonami Shinji, a professor of a university in Aomori Prefecture, one month after the explosion. This same researcher was forbidden by the authorities of the Fukushima prefecture to take readings in the days following the disaster, thus parasitizing an accurate reading of a part of the radioactive elements. He was officially suspected of stirring up trouble among the population. Another professor of nuclear physics at Kyoto University, Koide Hiroaki, noted that the amount of Cesium-137 (one of the most dangerous nuclear components) released into the atmosphere from Reactors 1, 2 and 3 was 168 times greater than that released by the Hiroshima nuclear bomb. At the same time, the collection of precise data by zones carried out by the prefecture is interrupted. The monitoring equipment was considered too imposing and likely to cause anxiety and discrimination among the population. Once again, FMU’s position is clear: the risk is not so much physical as psychological.

Finally, the last piece of the puzzle: milk. The FMU, again, announces that at Chernobyl, cancers developed through internal exposure to radioactivity and very little through external exposure. The situation is therefore perfectly manageable if the food intake is effectively controlled. Such as milk, for example, which, coming from contaminated animals in a region that is no less contaminated, causes major concerns. But here again, the machine jams: if food ingestion is obviously one of the central causes of exposure, inhalation is no less important. Moreover, the total decontamination of areas covered with radioactive dust remains unachievable. And the wind raises these dusts so fine that they penetrate the lungs and offer themselves a royal way for internal contaminations that these researchers knowingly omit.

Ultimately, Yamashita resigned in 2013 from his position. If he admits that he did not give adequate advice in the first days of the cloud, his involvement in secret meetings, organized within the offices of the prefecture during this critical period with the objective of not making any link between radioactivity and thyroid disorders and not alarming the population, will be fatal to his position as an honest scientist.

However, the national newspapers still relay this speech during the celebration of the four years of the disaster, without a hint of questioning…

Summary by Nicolas Bras of the article published in the online magazine « The Asia-Pacific Journal: Japan focus ».