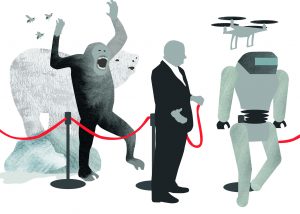 L’Obs, an old reputable French weekly, had the headline on October 17 « Artificial intelligence disrupts our lives(1). « On the cover, a portrait of Yann Le Cun on tour to present his book Quand la machine apprend. This researcher and winner of the Turing Prize (the Nobel Prize for computer science), is presented as one of the major figures in artificial intelligence.

L’Obs kindly offers its pages to this Facebook executive and the framework of questions reveals a fascination for this scientist, at the forefront of technoscience, expatriated to the United States. Reading the interview given by L’Obs and the way he is invited on TV sets (even the most elevated ones like France 5 for example), artificial intelligence (AI) and the computerization of the world that is associated with it do not seem to pose any democratic or ecological problem. The political and social question does not exist and the voice of progress at all costs is unstoppable.

INDEPENDENCE OF THE MEDIA…?

From his first words, Yann Le Cun announced the color:  » Artificial intelligence is omnipresent in our daily lives and is about to transform our economy . The question asked was how he got the idea to write this book. AI, a misleading expression which consists above all in the exponential development of algorithms, would have appeared as if by magic in our lives. Its character already seems autonomous in the sense that all sectors of the economy and of daily life are obliged to submit to the imperatives of calculation and forecasting in order to draw the maximum possible and imaginable profit from each human activity. The journalists who conducted the interview could have asked this great scientist about the lobbies such as Digital Europe, which put all their weight on the States and European institutions so that the levels of digitization are always higher and favor an optimal environment and market for the multinationals of the sector. Instead, Le Cun takes the opportunity to announce that his book is an opportunity to explain the reality of AI’s capabilities and its limits.

We are still far from intelligent machines, he reassures us. The game of transhumanists often consists in distancing themselves from their work by declaring that such or such invention is inaccessible or unattainable in the medium term. At the same time, in order not to frighten with their projects or simply by their speeches, they will blur the cards by specifying that all this is not new and that it has always existed. To a gently asked question about the concerns that AI may raise, he replies:  » This revolution is nothing new, we use calculators, computers, or even paper and pencils to augment our memory « .

Yann Le Cun’s name would be associated with convolutional networks. What is this seemingly complicated specialty? In short, to teach algorithms to imitate the human brain and more precisely the neurons. This work will eventually lead to the production of personal assistants that can easily hold a conversation, like in the movie Her where Joaquin Phoenix falls in love with the machine that accompanies him. Not for a moment is the question of the real utility of these technologies asked, in

The Obs , as in the vast majority of articles that deal with these « innovations ». The reigning ideology is based on the logic  » if it is possible, let’s do it « .

On the issue of facial recognition and personal freedoms once again Le Cun has the opportunity to develop his propaganda without any obstacles. He imposes without concern this hazardous comparison: according to him, if people were not afraid of the printing press because it was not a danger, why would they be afraid of the excesses of AI? The debate is thus closed. Moreover, he reassures us by adding that he participated in the creation of an association that questions ethics, he says in L’Obs. However, other specialized media report that Partnership on AI was created with the aim of  » ensuring that AI technologies benefit as many people as possible ». This « association » is the result of an alliance between Facebook, Google, Amazon, IBM and Microsoft.

After 6 pages, we reach the end of the interview and L’Obs finally informs us that Yann Le Cun holds an important position at Facebook, which is  » often criticized for its data leaks  » according to the journalists who conduct the interview. To the mention of the criticism of the use of personal data (the Cambridge Analytica affair) by the multinational headed by Marc Zukerberg, the Silicon Valley star Le Cun responds without scruples:  » This company has one quality that I really appreciate: when problems are revealed, they mobilize to correct them . He adds that he does not have the legitimacy to decide for the company what is good or not for it. But in conclusion, he points out that  » if a technology limits people’s freedom, they will reject it.  »

In his role as an executive at Facebook, an ultra-dominant company that inserts itself into the privacy of the majority of the planet’s population, without constraint or outside element, each individual would have the right to refuse a troublesome technology. Nice way once again to depoliticize the issue.

The Cun will have been able to deploy his catechism as well on the public service as on the French private channels: October 20 on Europe 1, October 22 on France Culture, November 2 on France Inter, France 5 …

We could go on at length to illustrate the ideological connivances in France that lead to the promotion of a fervent defender of real transhumanism. These speeches reveal a visceral fascination for techno-scientific progress and its many avatars. When it comes to discussing alternatives and solutions to mitigate the current ecological disaster, the media and so-called left-wing movements (including ecologists) criticize green capitalism and the technologies associated with it. Yet about science, technology, prospects and innovations (magic words against which no one can oppose under penalty of being called obscurantist), the most zealous transhumanists have an open forum and no contradiction is opposed to them.

Leaving aside the general media, for which one should not expect much, one discovers that in Belgium Laurent Alexandre, in addition to open forums in the media, is invited to the Federal Parliament by Ecolo elected officials. In the proposed resolution filed on March 29, 2019,  » aiming at an inclusive and sustainable digital agenda in Belgium In the « Green Transition » bill (tabled by Mr. Gilles Vanden Burre), the ecological transition is clearly shown for what it means in practice: that is, it is subordinated to the energy transition (deployment of wind and photovoltaic energy, which are not renewable) and the digital transition (imposition of digital technology everywhere).