Nuclear energy: a political choice from the 1950s… still operational 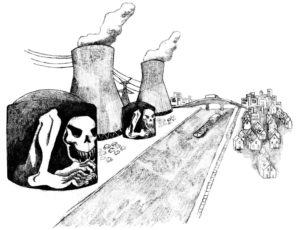 On December 8, 1953, U.S. President Dwight D. Eisenhower gave a historic speech to the United Nations General Assembly. He proposes to launch the program: « Atoms for Peace ». His objective is clear: to convince his compatriots and the whole world of the exceptional advantages of nuclear energy. It is not only an unparalleled deterrent weapon but also an incomparable means of producing electrical energy when domesticated for purely civilian purposes. This was the birth of the slogan « nuclear power, too cheap to meter », which heralded unlimited energy abundance.

As early as 1953, the President of the United States proposed to the developed countries to take advantage of the American technology and industrial know-how in nuclear matters. The Manhattan Project, which allowed the development of the atomic bomb and its terrifying use in Hiroshima and Nagasaki, swallowed up considerable financial resources; it is logical to want to make the discoveries it allowed profitable and at the same time, in the context of the Cold War, to extend and strengthen its zone of influence. The Commissariat à l’énergie atomique (AEC), a civilian institution largely under the control of the military, is multiplying its initiatives and spending considerable sums to develop civilian applications of nuclear energy. In 1957, the ACS set up its Plowshare division to demonstrate the safe use of nuclear energy. The following year, the father of the H‑bomb, Edward Teller, went to Alaska to announce the birth of Project Chariot, a plan to carve out a new port in the Alaskan coast by detonating six H‑bombs. At the same time, the project to develop a nuclear-powered airplane wastes billions of dollars.

None of these projects came to fruition, but they are indicative of the prevailing mood. It was not politically correct at the time to question what was presented as self-evident: nuclear energy is potentially beneficial to humanity and nuclear technology must be developed to meet the legitimate expectations of the population. Dwight Eisenhower did not limit himself to enthusiastic and promising statements in 1953; he proposed the creation of an international tool for promoting civilian nuclear energy and controlling the use of nuclear materials: the International Atomic Energy Agency (IAEA).

1 The IAEA as a tool for promoting nuclear energy

The IAEA was officially founded on 23 October 1956 by 81 countries. Its statutory role is to ensure the safe and peaceful use of nuclear energy technology and science. To this end, the IAEA is responsible for inspecting existing facilities to ensure their peaceful use; it publishes recommendations and analyses for the safety of these same facilities in a development perspective that has never been questioned, even after Chernobyl and Fukushima.

After the ratification of the Treaty on the Non-Proliferation of Nuclear Weapons (NPT) in 1968, the IAEA, which is logically responsible for its implementation, was unable to prevent India, Pakistan and Israel from becoming nuclear powers. It has been much more effective in assuming its role as watchdog of the so-called civilian nuclear industry by systematically minimizing the consequences of accidents and questionable practices that have led to the contamination and irradiation of populations. The IAEA has an effective weapon to do this. Since 1959, the WHO (World Health Organization) has had an agreement with the IAEA whereby the WHO has undertaken to communicate publicly on the health risks of exposure to radioactive radiation only after consultation with the IAEA.(1)

In 1995, the proceedings of a symposium organized by the WHO and devoted to the consequences of the Chernobyl disaster were banned from publication by the IAEA. This symposium brought together more than 700 doctors and reported dramatic genetic consequences that have since been widely confirmed.

2. the ICRP as guardian of the temple

Under the impetus of the American National Council on Radiation Protection, created in 1946 to take into account the new radioactive risks incurred by the army and research institutions, an international commission was set up in 1950 to propose radiation limits not to be exceeded by workers and the public. At that time, little information was available on the effects of prolonged exposure to low doses. The damage caused by acute doses of radiation was the focus of scientific attention. In this context, the ICRP recommendations focused on the concept of acceptable dose.

The basic principles of the ICRP recommendations are:

- Rationale: The utility of a practice leading to exposure must be established;

- Optimization: the corresponding exposure must be as low as possible, also known as the ALARA principle (as low as reasonably achievable)

- Limitation (limit values are proposed corresponding to an « acceptable » risk).

However, man cannot entirely refrain from using ionizing radiation. In practice, the problem is to limit the radiation dose so that the risk created is acceptable for the individual and for the population. This dose is called the « permissible dose ». According to the ICRP, the burden on society must be acceptable and justified, considering the « increasing benefits that will result from the extension of the practical applications of atomic energy . »

At the beginning of the 1960s, when the great nuclear powers were multiplying atomic tests in the atmosphere (United States, Great Britain, USSR, France), the dissemination of deadly radioisotopes caused millions of victims throughout the world, without eliciting the slightest reaction from the ICRP. Karl Z Morgan, former head of the ICRP, does not mince his words on this subject:  » At that time, most ICRP members either worked directly with the military nuclear industry or received most of their research funding from that industry. No doubt they have given up biting the hand that fed them ! « .

The ICRP has regularly lowered the radiation exposure limits, but has always dragged its feet and has not questioned the principles adopted in the 1950s.

3. the Euratom treaty or nuclear power against democracy

In parallel to the Treaty of Rome, the founder of the European Union, another treaty, the Euratom Treaty, was adopted in 1957 by the six Member States of the time with the aim of contributing to the development of nuclear energy by constituting an Atomic Energy Community.
Article 1 of this treaty states that  » the mission of the (Atomic Energy) Community is to contribute, through the establishment of the conditions necessary for the rapid formation and growth of nuclear industries, to the raising of the standard of living in the Member States and to the development of trade with other countries . Perfectly in line with the spirit of the 1950s, the Euratom Treaty has never undergone the slightest significant reform for almost 60 years. A logical reform is long overdue: the decisions taken within the framework of the treaty, notably on radiation protection, are totally outside the control of the European Parliament. It is only consulted by the European Commission and its positions are generally ignored or even despised. There is no reason why the co-decision mechanism, even with its weaknesses, should never have been introduced into the functioning of Euratom.

In addition to institutional support for nuclear energy, this treaty provided concrete mechanisms for financial, research and international cooperation. The Euratom loan mechanism allowed significant financing of investments in the nuclear industry during the 1960s-1970s and 1980s until 1987. Moreover, through the research and development framework programs, the resources devoted to nuclear energy have represented half of the total allocated to all energy sources in recent decades.

The privileged status of nuclear energy compared to other forms of energy is not limited to these aspects. Legislation on protection against radioactive radiation is adopted within the framework of the Euratom Treaty and, as such, is not subject to general environmental protection principles, such as the precautionary principle. The basic principles of radiation protection are those adopted and recommended by the ICRP (see above) in the 1950s at a time when nuclear energy was supposed to compensate its « possible » nuisances with « undeniable » benefits. They protect the nuclear industry more than the population.

Despite attempts to question the survival of this treaty, notably by Austria, no real debate could take place on this subject. Europe, so attached to its ordo-liberal principles and, in particular, to that of a market where competition is free and undistorted, should logically put an end to the existence of a treaty that grants a privileged status and operating conditions to a form of electricity production rejected by many Member States and by a majority of Europeans.