Mess and other joys 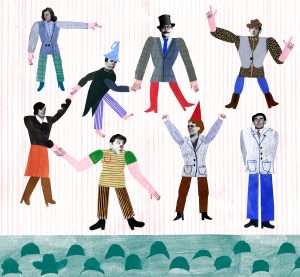 So, in the early evening of the second day of August 2020, and we may still have, as you start reading this column — take heart, it’s going to be a blast! — a virus called Covid-19, a federal government, a Flemish Region, a Walloon Region, a Brussels Capital Region AND a Flemish Community, a French Community, a German-speaking Community, provinces and municipalities. To what it is good and right to add a Scientific Committee Coronavirus, composed of experts in all kinds — infectiologists, virologists, epidemiologists and other specialists — charged to help the authorities of health (here, we pass on the numerous cells of this and that that had and still have for mission to coordinate the whole of the observations and the decisions that were, are and will be taken) to fight against the coronavirus. This committee gives scientific advice about the evolution of the virus and helps our country to prepare, in a first step, and fight, in a second step, against the nasty coronavirus. Good; but that’s not all. We also had — and we still have — more or less eminent press organs, public and private, television, radio, paper and virtual newspapers, without which we would be very annoyed and ignorant. Thanks to the press. It is also impossible not to mention the famous and indispensable social networks, which are a formidable sounding board for anything and everything. In short, in the end and considering all of the above: a rather pleasant cocktail and even, dare we say it, at times downright zany and even jubilant. We’ll get to that.

The federal government and all the other « entities » have to have good people working for them to do their best, to meet the approval of those — you, me, many others, about 11 million people — for whom they are responsible, right? We need a Prime Minister for the federal government, presiding ministers here and there, representative assemblies of the voters’ choice, deputy ministers, advisors of all kinds, cabinet members, secretaries, communicators; in short, a host of decision-makers more or less qualified to manage the affairs that affect the lives of the people. And, in this case, the sudden appearance and spread of the virus we are dealing with here, it was necessary to take measures and not let this epidemic take too much.

Except that, it will have escaped no one, except the first interested parties, the plethora and even the overnumber of ministers, all competences included, had the effect that, to put it plainly, these people were stepping on each other’s toes, deciding one thing here, while the experts in science were jostling each other on the television sets, in the pages of the newspapers and on the social networks, making big gestures and taking to task the political decision-makers who were unable, in their eyes, to really understand the situation in which we found ourselves and which was nothing less than catastrophic. From confinement to deconfinement in small steps, from opening of shops to various bans, from numbers of people to frequent or not in such or such context, from police presence and rigor everywhere with, on occasion, one or the other blunder without too many consequences, from appalling deaths in hospices of old people locked up and abandoned by all, from the increasing number of infected or suspected of being infected, the epidemic has finally taken the shape of a vast morbid pantalonnade.

As far as « the press » is concerned, it is obvious, all media included, that it has played a role of the first magnitude in the bewildering torrent of the most frightening information, creating in this way a general climate of disproportionate panic in a good part of the population not knowing anymore to which saint to devote themselves to escape the terrible and inexorable:  » We’re all going to die! ». As for the rebellious and refractory to the injunctions of the authorities, they have had a great deal to do on social networks where radical positions, calls for civil disobedience, a good-natured je‑m en-foutisme and the most zany theories tinged with conspiracy.

But you have to understand them, these good people. Rarely and for a long time we will have had to take note of so many contradictory signals as much as far-fetched in all the fields related to this « crisis of the coronavirus ». Whether it is in the wearing of the mask, alternately superfluous, inadequate, without real interest to counter its spread until the obligation for all to wear it in all places under penalty of heavy fine, for what concerns the travel of holidaymakers there or elsewhere abroad, with orange, green and red zones, inhospitable places and others ready to welcome us with open arms according to supposed risk zones changing from one day to another, when it was not from one hour to another, according to who expressed himself on the question; not to mention the second wave alarms:  » She is here, she will arrive tomorrow or next Sunday… No ! it will be in the fall… « A few words to summarize this lamentable saga: mess, mismanagement, incompetence… And this because it was necessary to lift a social lid at the risk of an unwelcome explosion, but also to comply as quickly as possible with the injunctions of the socio-economic circles that demanded that the workforce put on forced rest return to work happily in the interest of trade and industry without which, as no one knows, there is no life possible.

PS: At the time of sending this chronicle to whom it is due, this August 10, we had thus right to these fights, in the littoral; a pretty popular festival. By the time you hold our excellent newspaper in your graceful hands and under your watchful eyes, things may still have happened…