MANSET OR BREAKING THE CHAINS OF THE USELESS 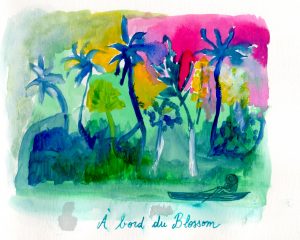 Gérard Manset has just released a new album(À bord du Blossom). An opportunity to look back at the many creations of this poet, who is esteemed by the critics but little known by the general public, so much so that he despises publicity, the cult of the image and other sales of himself (he has hardly ever appeared in a television program).

Served by often fascinating melodies and accompaniments, his texts speak very frequently about nature, its destruction, the technological invasion and its consequences. Without ever sliding into didacticism, these songs nourish awakening and revolt. They are the exact opposite of the many kitschy and consensual products of the sustainable development trend. We can see the poetic expression of a radical ecology. A few glimpses at some of the gems from these treasures.

Manset denounces, but without ever falling into the ugliness of what he points out. It first evokes what we are losing, and it is especially by this way that it feeds the anger which we need.  » In the gardens of the 21st century / Where cloned children play under the trees / Sorrow, gaiety, have the color of marble / And nothing is left of what was loved / Remember those long sips / Of that pure water, the sky was gorged « .

He tells things as they are or become, without concern for unhealthy sensitivities (p. e.g. people who are happy that their kids spend more than 4 hours a day in front of their smartphones — which is already the average time for children. At least, this is what Laurent Alexandre, a great promoter of artificial « intelligence », boasts about ((1)).  » In this cursed garden / Where bad children play under the branches (…) To some false sparrows throwing false crumbs / Remember that madness is lurking (…) / In these gardens and their mutant lawns / And we may one day imitate them « .

The same table also evokes the illusions of those who believe that technology, including that presented as sustainable, will be enough to avoid the worst:  » Remember these old songs / Only the wind’s trickle remains / That turns the windmills there / Whose long fingers stretch over the plain « .(2)

SILENCES WITH A THOUSAND VOICES

Manset knows how to invoke things without ever saying them, so as to touch with much more force than with explicit words. For example, in his song about the Amazon, on the album Manitoba ne répond plus. He describes this region where he has traveled, without saying anything about the unspeakable tragedy that has been played out there for so many years. But this tragedy is all the more present, in all its immensity.  » Oh, Amazon, how far away you are (…) / With your tall bare trees (…) / Your glass-blue pools (…) / Your unknown flute sounds (…) / Like a half-read page.  »

In a way as modest as it is direct, he depicts the destinies of the damned of the Earth. For example, child soldiers, whom he met during his numerous trips to Asia and Africa, far from the tourist routes.  » Enrolled by force / A few strokes of a rifle butt / On a child’s face / It’s like a fruit that cracks / In the jungle, even worse / But that nothing will forbid / Living in his hole, like a rat / But that nothing will forbid (…) / It’s this dirty water that he drank / Cadavers of dogs, of zebus (…) / These black lips that smile at me / From Lagos to Conakry « .(3)

In a few simple words, this poet can suggest things as vast as the relationship between peoples, the North and the South, the vanity and illusion of the possessions of the dominant.  » Millions of lives hidden in tin houses / Ant carrying the world on your shoulders / Bending but not breaking, like the willow (…) / Houses, castles, walls of sand, walls of wind (…) / Crystal cut purer than the diamond / Which becomes, under our fingers, sand, simply « .(5)

The last 3 lines of Garden of delights(6)After a sobering and poignant evocation, they say more than 100 valuable pleas:  » When the world around you has changed so much / That all those things you used to safely brush against / Will all be so heavy to move / Will all be foreign objects / Where did they put it / That bit of orchard? (…) / With its wisteria / Like a root / In the earth plunged / Garden of delights / Turns like a propeller / In the bottom of the skull « .

A HUNDRED FACETS, ONE SPIRIT

Manset’s work has many other faces, even if they form a unity. A great traveler on Earth, he is also a great traveler inside. In the past, he has immersed himself in Buddhism in particular, and evokes other religions and philosophies in his texts. However, doubts can painfully invade him, which confirms his soul of research. But the spirit and the depth are everywhere, in his creations.  » When you lose a friend / It may be that he is sleeping / In another universe / Of frost and dead wood / In another setting / Simply weakened (…) / His soul is peeling off / Like yellowed paper / School papyrus (…) / Embalmed fakir / Pierced with spikes (…) / Maybe it’s not / What we’ve been told / If it’s cold there / Like it is here? (…) / When we lose a friend / Light remains « .(7)

Even if there are gems in most of his creations, I think that Manset’s universe is best accessed through his four albums released between 1998 and 2008. These are the ones that most fully testify to his powers as a poet, which previously were revealed more punctually — though also forcefully. The last two albums are more difficult to access. Good to know: Manset is also a writer and painter (and has just published the story Cupid of the night).

Let’s hope that it will help us for a long time to rise. So that the garden that was the world remains something other than a memory and a torture at the bottom of the skull.