Letter to the mayor 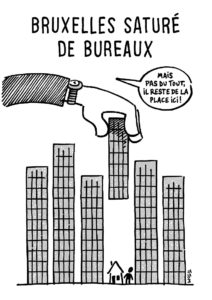 You know better than we do: at a time when Brussels is threatened by separatism and still underfunded by a contemptuous and predatory state, its only guarantee of a future is the presence on its territory of a series of international institutions. But our region’s status as an international capital is in jeopardy as the heart of Europe moves ever further east. We must therefore implement policies worthy of an ambitious and dynamic city, capable of retaining international institutions and attracting more wealthy households to better contribute to its development. Especially since other cities, only a few hundred kilometers away, are not skimping on the means to strengthen their metropolitan appeal.

This is why we, the signatories of this open letter, have a duty to denounce the obstacles that prevent major urban projects from being fully developed in Brussels, the red tape that stifles the spirit of enterprise, hampers the imagination of urban planners and condemns the great names in architecture to the most banal mediocrity.

It is true that your presidency of the government for almost 20 years has contributed to putting Brussels on the right track, and we are grateful to you for that. Entire neighborhoods have been dedicated to European institutions; some have been transformed into business districts where the production of offices and hotels is not ready to stop; others, once slums, now attract artists, middle classes and expatriates. For a few years now, Brussels has finally had its own casino. Its first luxury housing tower is now coming to life. New shopping centers are planned. A new stadium and a museum of contemporary art have just been announced… In short, Brussels is on the move.

But how fast? In the twenty-first century, the capital of Europe still has a sinister face. The banks of the canal ? Always lined with crappy industries. The area of the international train station ? It took almost 20 years for the Region, under your leadership, to expropriate a few hundred inhabitants: at the time of the national state, thenal, it took only a few years to expropriate over 15,000 households in the North End. At the exit of the TGV, offices and new hotels have not been able to overcome the entire blocks where alcoholism and insecurity reign and which constitute the first contact of tourists and businessmen with our city. Two steps away, despite seven district contracts, Cureghem continues to house a slaughterhouse that spreads its stench daily, while next to it a whole neighborhood takes pride in being the hub of the international used car export business. And what about the new piece of city promised to Tour & Taxis? After years of political procrastination and bureaucratic hassles, it is still struggling to get off the ground… We could multiply the examples of missed urbanistic opportunities.

The major urban projects, necessary for the international development of Brussels, systematically come up against various problems that plague our Region. Investors’ ambitions are thus blocked and then revised downwards. However, given the small size of our territory, opportunities for such gestures to redesign our capital are very rare. They are all the more precious.

Therefore, we do not understand your position on the issue of moving the prisons of Saint-Gilles and Forest. At the beginning: a Masterplan of the Federal State aiming at increasing the prison capacity in Belgium and planning to endow Brussels with the largest prison in the country, to be built on the green plains of Haren (which neither you nor we are going to deplore, as these grounds have so far only been used by a few hundred inhabitants and the rare nature lovers) An opportunity for our region, especially since the construction of this mega-complex should lead to the removal of the current prisons, freeing up 10 hectares of exploitable land in the middle of the city and creating an exceptional opportunity for urban development!

We were surprised and disappointed to hear that your voice had joined the chorus of backward-looking lamentations that condemned any large-scale project in this area in advance. « I don’t want this area to give way to office towers », you said.you declared(1). « I would prefer housing. We could even lay out new streets where the prison wings are now. »

And why not, while you’re at it, recreate cul-de-sacs and fountains, install public benches, artisans’ workshops or grocery stores? You’d think you were dreaming… You, the author of the Brussels International Development Plan! You, who have pushed international functions, offices, convention centers, stadiums, densification and modernity in all the areas you have declared strategic! Why don’t you salivate at the potential of these 10 hectares? Why don’t you dream of building one of these « metropolitan development poles » necessary, according to your own plans(2), to meet « the tertiary needs linked to the international influence of Brussels and its role as an international capital »?

As a direct neighbor of the Saint-Gilles prison, have you been affected by the NIMBYsme (« Not In My BackYard »), this syndrome that paralyses the city and that you have fought against on many occasions during your career? Has the fear of an « energetic treatment »(3) turning against the residents, as in the Midi, got the better of your ideals? You are probably « only » mayor of a municipality, Saint-Gilles, but that does not justify giving in to the distressing temptation of sub-localism. You are expected, as the symbol of our region, to embody in all circumstances the imperative defense of the best interest.

The site of the future ex-prisons must resolutely be dedicated to the realization of a great project, one of those that disrupt the city and change the landscape… We could erect there, as you advocate for other districts, an « urban signal », a set of « iconic towers », a « cluster of tall buildings » rivaling the City of London! A stadium? A shopping center? A new hemicycle for the European Parliament? A place in your name! The whole thing will be enhanced by a subway station, and why not by a tunnel in order to bury the automobile traffic that these new functions will inevitably generate.

Of course, all this could take on unforeseen proportions and cause some collateral effects, such as the expropriation of local residents. In any case, it is not advisable to live next to a construction site of this size that will last several years, and it is not worthy of a man of your rank to live in the deafening noise of excavators, vibrations, dust, nor to suffer the uncertainty and humiliation of painful expropriation procedures.

You would probably be better advised to sell your house amicably, without further ado. The Region will probably not be able to afford to purchase it at full value, but it must be able to realize a substantial capital gain when it resells the bare land to private investors.

We are convinced that you, who have shown us the way, will understand that the logic of international development does not allow for any exceptions, not even in your neighborhood.

Wishing you a good reception of this letter, please receive, dear Mayor, our apologies in advance for these possible small inconveniences.

The content of this open letter, which was sent to us anonymously, does not commit the editorial staff of « Kairos ».