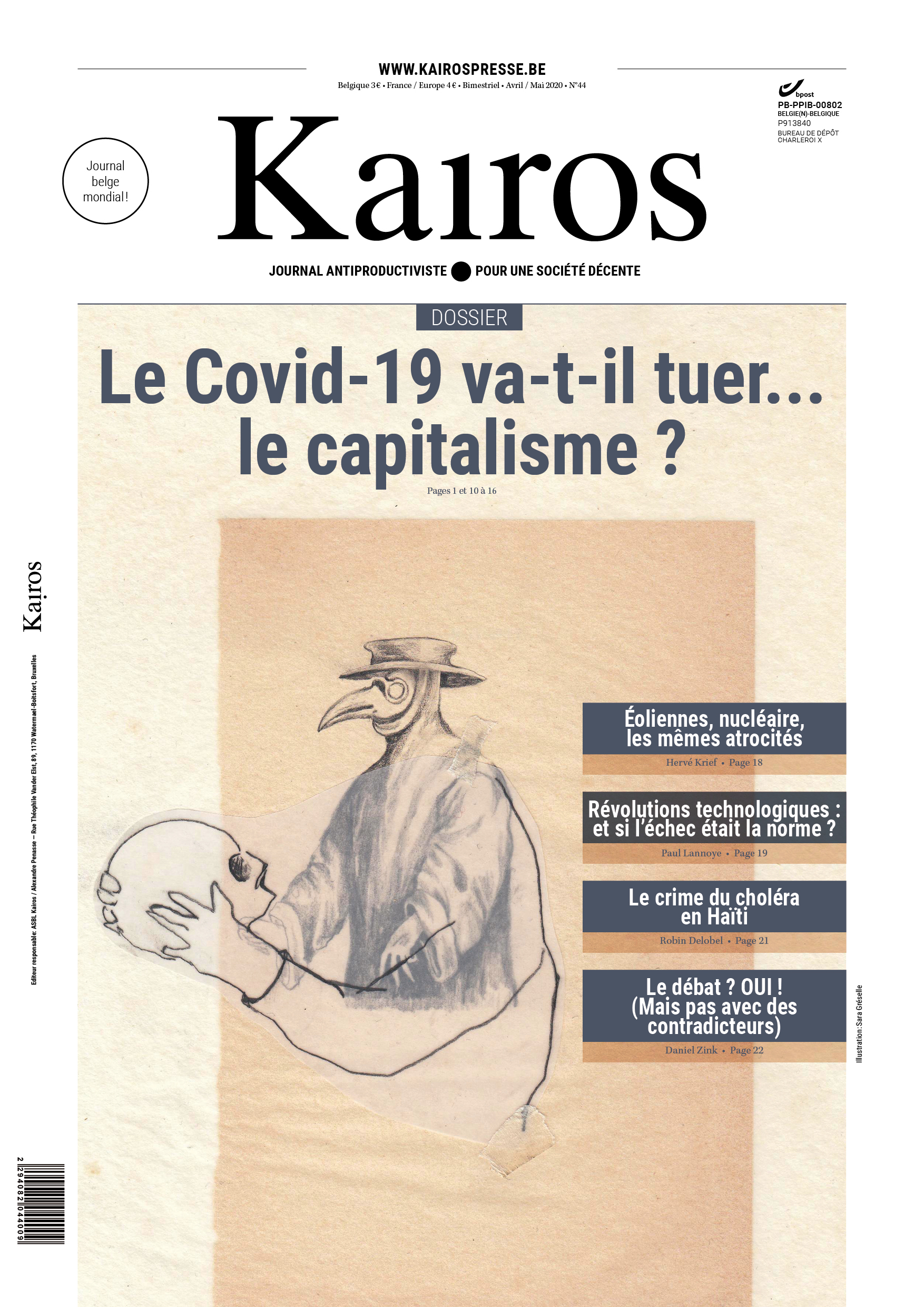 If the current situation were to teach us a truth, it is undoubtedly that it is to the extent of an obligatory modification of our « habits » that we can take the time to stop and think. But have we really changed all our habits, knowing that the one that consists in informing ourselves, through the same media as before, has grown more? It is therefore also likely that shocks like the one we are experiencing can have the opposite effect.

Is not the coronavirus a form of apotheosis of all that has been happening for a long time, which is cynically and « normally » part of the productions of a society that has given priority tohybris (excess) over the common good? Depending on where you stand, you can say that nothing is going well in our society, but from another point of view, that everything is working fine. In the first case, we will name the indecent gaps between rich and poor that are irreparably widening, the natural disasters that are increasing in number and scope, the disappearance of flora, the dramatic subjection of human life to algorithms and screens, the sixth extinction crisis of species, etc. In the second, we will see that multinationals have never been so powerful, that the media are concentrated in the hands of financial elites and other big fortunes, that dividends are raining down on the increasingly rich, that destruction is creating wealth, concentrated, above all. And that despite all this, many still believe in the trickle-down theory.

Those who have a vested interest in seeing nothing change will benefit from this situation. The success of their business will depend on the reaction of the middle class, which is caught between the « top of the heap » and what remains of the working classes. What the outcome will be, we do not know. But the general apathy and ambivalence of a petty bourgeoisie that is content with what is offered to it, trading any hint of revolt for a city trip or the latest made-in-Foxconn gadget, does not bode well. Pessimistic you say? It is too late to think in these terms, establishing only that everything led to nothing; that the demands were too poor; that the hope was too present and timely. At this time, hope is ignored as an excuse to do nothing. We act.

It is therefore useful here to proceed to a form of synthesis, which will make the thurifers of the « appeal to the rulers » squeak, who have not governed anything of the common good for decades, but are just content to ensure their career plan, and thus in a subsequent and logical way, to guarantee the perpetuation of capitalism, whose end is only an accumulation, which can only end, if we participate in it, on the devastation of the Earth that welcomes us.

However, the words will delight those who have been struggling alone for a long time to hear something other than the psalms of the church of growth, relayed by their media dioceses. The latter are of all ages, but the tendency to consider heterodox thinking as outdated frequently accuses them of being « old ». Certainly, there may be something rewarding in being described in this way by the faithful who ensure the end of humanity by their daily certainties.

It will be necessary to begin with the end that illuminates the beginning: if Coronavirus there is and if mediatized reactions of this type appear, they are only the result of what we are, of what we made, and of where we are. Nothing more, and it’s actually quite simple in the end. Western elites have always been able to count on a middle class that did not want to lose any of its prerogatives. This one has always ranted in an affected way, leaving the illusion of the confrontation while assuring its own perpetuation. Trade unions, development aid, NGOs and various associations, parliaments, are only the remnants of a struggle that has lost its radicality, and have even become indispensable, since they served as a prop for the dominant system. It was necessary to feign opposition, but not to oppose in any way the foundations of the system that allowed them to exist. The others, in revolt, had proved, in the areas that constituted our reservoirs of raw materials and labor, that real opposition had only one outcome: lethal. Biko, Allende, Sankara, Lumumba…, are the testimony. During this time, the generalization of the vote deluded the people that it participated of the collective, especially duped of this trick of prestidigitation that had made accept this oxymoron of a « participative democracy », because it could henceforth enjoy the fruits of the commercial consumption.

Either, the successful revolutions have always been bourgeois. Why would he change it? We will start with a preliminary, however, which will try to show that whatever the will to achieve the crisis coronovarian present, the intention matters little, and it is perhaps that the worst: the orgy is what organizes us since a long time, it does not matter if it is wanted or not, it is an intrinsic part of a mode of social organization, it is thus its creation, always its accomplished form. The opportunity makes the thief, and any shock makes strategy. The only problem now is that the conflagration affects those who are usually sheltered. Before, yesterday, we didn’t mind consuming objects and clothes assembled and sewn by Asian slaves, or sending our electronic waste to Africa. We knew it, the important thing was not and still is not the information, but the will to be free, which implies the will to think. It is dying, and the « smartphone » generation may be the end of it.

The following will be an attempt to explain, in a non-exhaustive way, this perennial fact that, again and again, nothing really changes, and therefore everything gets worse, and that « change in continuity » is perpetuated without end, and this is its pure logic. We will stop on this practice with the stamped harmlessness for the order in place, that are these daily applause for the medical profession. This will offer us an ideal transition, allowing us to question the bureaucratic medicine that cannot be questioned by a simple clap of hands, a noisy catch-all that is very sympathetic to « positive » in the novlangue. Therefore harmless.

We must conclude by reminding ourselves that there is nothing new about the new and that the new is only dressed up to make us forget who we are and why we are there. Today, « we are all Covid-19 ». Will we be able to draw conclusions, or, as the lucid Jaime Semprun said, to strive again and again « not to conclude »?