IS WORKING 5 DAYS A WEEK COMPATIBLE WITH DEMOCRACY? 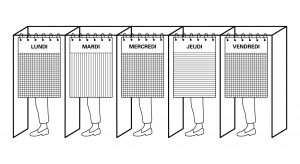 From the Greek demos, « all citizens » and kratos, « power », democracy refers to the political system in which power is held and exercised by all citizens. As they hold the legitimacy of political power, citizens participate in the deliberations and decisions concerning the vote of laws, the budget, taxes and the organization of « living together ». While in a direct democracy, citizens exercise their sovereignty directly, in a representative democracy, they exercise it through elected representatives (president, deputies, mayors, etc.). In a democratic system, the constitution and laws guarantee equal rights, freedom of expression, association and worship, and a free press. Since each French citizen has the freedom to express himself, to elect his representatives, to associate and to join the association, the political party or the religion of his choice, the political system of France appears democratic.

In order to determine whether the French really live under a democratic regime, it seemed relevant to me to refer to the Athenian democratic model, to Michel Foucault’s conduct of practices and to Alexis de Tocqueville’s description of America at the beginning of the 19th century.

The Athenian political model, from the fifth to the fourth century BC(1), which was based on direct democracy, is often taken as an example. Whether rich or poor, all Athenian citizens had the right, on the one hand, to participate in the deliberations and decision-making that concerned the political life of the city (setting taxes, voting on laws and the budget, making peace or war, etc.), and, on the other hand, to be elected by lot to the Boulè (Council of the Five Hundred who prepare the laws and see to their application) and to theHéliée (popular court) for a period of one year. These rights were exclusively reserved for citizens. To be a citizen, it was necessary to be a free man, to have an Athenian father, to be registered at the age of 18 years on the registers of its demesne (administrative district at the base of the civic life) and to have made its ephebia at 18 years (military service of 2 years). Since slaves, foreigners, women and boys under eighteen years of age were not entitled to the status of citizens, out of the 380,000 inhabitants of Athens in 431 B.C., only 42,000 were citizens, that is 11% of the population(2). Even if the workers, peasants, fishermen, craftsmen and merchants had the status of citizen, as they were absorbed by work, they did not have enough free time to participate regularly in the citizen assemblies of theecclesia. Only aristocrats and wealthy landowners, who owned many slaves and had free time, could afford to participate. To encourage the poorest and most remote citizens of the city to participate in the political life of the city, Pericles set up a daily attendance allowance within the Boulé and theHéliée(3). In spite of these allowances, on 40.000 citizens, only 6.000 Athenians who were not constrained to work to ensure their subsistence had really the free time to be trained, to take part in theecclesia and thus, to contribute to the political life of the city.

Although the legitimacy of political power is embodied in the institutions of the state, Michel Foucault has shown that power manifests itself through a more or less calculated, reflective and conscious mode of action intended to orient the behavior and possibilities of action of free groups and individuals, which he has called  » conduct « .  » Conducting pipelines « .(4) consists in implementing more or less visible techniques, procedures, practices and mechanisms of coercion intended to define, organize, direct and lead the  » conduct of men « (5). The conduct operates on the very ground of practice, taken in the most elementary sense of the term: what an individual does concretely on a daily basis.  » It is a question of establishing, according to Foucault, presences and absences, of knowing where and how to find individuals, of establishing useful communications, of interrupting others, of being able to supervise the conduct of each person at every moment, to appreciate it, to sanction it, to measure qualities or merits. Procedure therefore, to know, to master and to use. « (6) Practices are organized and ordered within a system of norms, values and procedures that give them a certain form of legitimacy. Since  » these are patterns that he finds in his culture and that are proposed to him, suggested to him, imposed by his culture, his society and his social group « (7), Foucault shows that the choice of a practice is not a matter of the individual, but of a social suggestion of which he is rarely conscious.

From this observation, the professional activity does not appear as a simple means of production, but as a mode of conduct of the practices with cultural or ideological character intended to structure the behavior of the individuals and the rhythm of the society. Since most of the social interactions that individuals have with each other take place in the context of a company or an administration, the daily practice of a professional activity turns out to be an instrument of non-violent organization and control of society. The norm of the work week being 5 days, it is therefore not the State, but the companies that have the responsibility and the charge, on the one hand, to organize and structure the rhythm of life of individuals and society, and, on the other hand, to supervise, control and punish in order to maintain the social order.

Since the employment contract is a contract of subordination, it is not the employees, but the company managers who set the objectives and the means to achieve them. Since employees do not elect their managers and do not participate in deliberations concerning the organization of work, collective bargaining on wages and the redistribution of profits, the way companies operate is not democratic, but bureaucratic, and in some cases authoritarian. The instrument of corporate control is the fear of unemployment, which has replaced the fear of physical violence of authoritarian regimes. Since it is not the fear of police violence but of unemployment that maintains social order, it is not the state but the economy or, more precisely, the companies that hold the power. Although France’s political system appears to be democratic, as employees, workers and managers go to work 5 days a week in a company, whose mode of operation resembles a bureaucratic system, the French do not live under a democratic system.

Alexis de Tocqueville’s description of America also makes it possible to question the nature of the political regime in France.  » I want to imagine under which new features despotism could occur in the world: I see an innumerable crowd of similar and equal men who turn without rest on themselves to obtain small and vulgar pleasures, of which they fill their soul. Each of them, withdrawn to the distance, is as if he were a stranger to the destiny of all the others: his children and his particular friends form for him the whole human species; as for the rest of his fellow citizens, he is next to them, but he does not see them; he touches them and does not feel them; he exists only in himself and for himself alone, and if there is still a family left to him, one can say at least that he no longer has a fatherland.

Above them rises an immense and tutelary power, which alone assures their enjoyment and watches over their fate. It is absolute, detailed, regular, far-sighted and gentle. It would resemble paternal power if, like it, it had as its object to prepare men for manhood; but it seeks, on the contrary, only to fix them irrevocably in childhood; it likes citizens to rejoice, provided that they think only of rejoicing. He willingly works for their happiness; but he wants to be the sole agent and arbiter of it; he provides for their security, foresees and assures their needs, facilitates their pleasures, conducts their principal affairs, directs their industry, regulates their successions, divides their inheritances; what can he not do to take away from them the trouble of thinking and the pain of living?  » (8)

Although the people are sovereign, French citizens exercise their authority through representatives elected by universal suffrage. They still have to be citizens. As they work 5 days a week, the worker, the manager, the entrepreneur, the craftsman, etc… are not determined by their status of citizens, but by their status of workers. Depending on his income, the worker’s freedom is often limited to a choice between a more or less prestigious offer of market goods and services. By identifying with his consumption, the individual associates his status as a worker with that of a consumer. Since they are determined by their professional activity and their consumption, the French people are not citizens, but workers/consumers.

The political system of France being representative, the exercise of the citizenship of the worker/consumer is very often limited to putting a ballot in a ballot box. In order to be informed about laws, candidates to be elected, as well as economic, political, social, ecological, climatic issues, etc… that concern him, the worker/consumer trusts the press and the media, which are owned at more than 80% by the ten largest fortunes in France(9). The newspapers, radio programs and television channels of these elites disseminate and propagate ideas, values and beliefs that manufacture adhesion and consent(10) of the workers/consumers to the work, to the consumer society, to the candidates, to the lifestyles and to the social project of the economic order. Not having the time to educate themselves, to inform themselves and to devote themselves to political life, the worker/consumer delegates the responsibility of voting on the laws that concern him (taxes, budget, working hours, freedom of trade and prices, etc.) to political professionals and so-called experts. By contenting himself with voting, working, consuming, entertaining himself and withdrawing into his private sphere of family and friends, he has lost the exercise of his positive freedom to a tutelary power. By taking away the burden and the responsibility of the political deliberations that concern him, this tutelary and paternal power, which includes industrialists, bankers, business circles and politicians, does not seek to make him an adult, that is to say free, autonomous and responsible. By looking after his safety and inviting him to enjoy, to rejoice and to entertain himself in order to obtain pleasures, he ensures that he is fixed in childhood. As long as the worker/consumer works 5 days a week and is content to delegate the organization of « living together » to elected representatives, democracy will appear to be a fiction, or rather, a story that one tells to children to help them fall asleep.