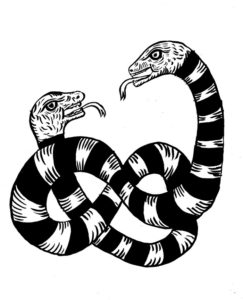 When did the « austerity » operation start? It wasn’t that long ago. Let’s remember: the American subprime crisis became public in 2007; Lehman Brothers, one of the five largest banks in the US, went bankrupt on September 15, 2008. It was then that the Berezina, which has since become a debt crisis, gave the ultra-productivists a pretext to implement policies of economic and social destruction that led to a complete crisis of the euro zone.

The truth is that these policies, imposed from above on the lowest, came at the right time. Remember that at the end of 2009, the Copenhagen summit was held to reach an international agreement capable of finding a solution to the climate crisis. The mountain of this mega-meeting has produced a non-result that is a historically unforgivable fault. It was the end of 2009, in the midst of the banking crisis, and the unsustainability of our modes of development was beginning to take hold in people’s consciousness, to become a central political theme. A deaf and powerful pressure was perceptible, questioning head-on the unspoken fantasy that irrigates all political action and its speeches: more is better and thanks to that tomorrow would be better than today. The Copenhagen summit served as a focal point for this questioning, increasing tenfold the questions that logically arise from the suicidal nature of our societies of infinite growth.

Copenhagen, whose success was only possible if we got out of productivism (we should not take our desires for realities), was forgotten. Questions about our lifestyles were also raised and the new international communication operation took the vacant place: in the face of the crisis, we have to be responsible, we have to tighten our belts, we have to be AUSTERITE. Note that it is true that we must drastically reduce the size of the economy and our material consumption, or we will devastate the planet. It is a sine qua non condition to find the ways of decent, non-productive societies. Austerity in the Merkozy way, on the contrary, has as its first effects to untie everything that makes up society and to bring productivism a little further along the road to disaster.

The next step of this communication plan is taking place right now: austerity is not enough to restore the accounts, so we need to boost growth. How do you do it? Such an arduous battle begins, between the left and the right, to know if we are going to destroy the world and the people by making them build bridges (green of course) or by making them consume more useless products (but green of course). Who of Hollande or Merkel will succeed in imposing their point of view? No doubt more debt will be created in order to invest publicly and to try to reduce unemployment temporarily, while at the same time massive deregulations, especially of the labor market and the social security system, will be imposed all over the place.

With these two terms « austerity » and « recovery », the active awareness of the unsustainability of our lifestyles has been relegated to the closet and the growthist delusion has found a new development. Two terms, and two times: first the people are put under great pressure, then they will accept an even harder productivism presented as the only way out.

After austerity, it’s hysterical growth. The whole of social-democracy is doing this with unbounded zeal, as a good pupil of liberalism. Lobbies, politicians, journalists, trade unions, are all in chorus for growth. Nowhere is there any question of asking a few common sense questions that seven year olds can answer. After 60 years of growth policies and in view of the results, shouldn’t we think about changing the recipe? Is it impossible, by chance, that the growth of the economy for more than half a century leads to saturation problems? Don’t rising energy prices make GDP growth unrealistic in the long run? Doesn’t the growth in the size of the economy mean that energy prices will increase? Can the size of the economy grow infinitely on a planet with limited resources?

But isn’t it the nature of fanaticism not to question the object of a delusional cult? The fanatic has a simple way of dealing with points of view that do not agree with his or her whim or that question the hold that the object of worship has on him or her. He eliminates them by all means. By evading them, discrediting them, insulting them, rejecting them, destroying them.

Thus, we regularly see fanatics revealing the nature of the cult of growth in the West. An example of this was provided to us in La Libre Belgique of May 22, 2012, which complacently relayed the words of Bruno Colmant, « professor at the Vlerick Management School and UCL, » and incidentally ex-boss of the stock market. Mr. Colman asserts: « These countries, which are not very industrialized, need growth, not austerity, and especially not degrowth, because this leads to deflation and therefore to an increased recession. Degrowth is an intellectual sham.

An analysis whose depth can be summarized as follows: degrowth is not growth and we need growth, so degrowth is a sham. One searches in vain for the beginning of an argument in this bubble-like circularity.

Existential Bruno Colman does not see how the vicious circle of the growth economy has come full circle, with growth generating austerity, and also having to provide a way out…

All locked up in their delusion, they can only conclude that the options to get out are invalid.

This would be excusable if the issues were different. But what is it about?

In trying to boost growth, they will mechanically devastate the social security tools (the « costs ») and seriously increase poverty and misery. They will accelerate the consumption of natural resources without which, until proven otherwise, no consumer goods can be produced. They will increase the resulting pollution. Access to resources is already at stake in wars, for example oil wars in Iraq, Libya, Afghanistan and Sudan. What can the recovery of an economy that depends on these dwindling resources lead to? Pollution exceeds many stability thresholds. Humanity, led by the West, has never emitted so much greenhouse gas and the climate change is close to becoming uncontrollable, while it already condemns millions of people in the most exposed countries.

What is at stake is nothing other than peace in Europe and in the world, the safeguarding of a habitable planet, the possibility for the present generation to lead a decent life and for the next generation to simply live.

Mr. Colman and the growth fanatics are playing with our lives. They are not fun, they are not caring, they are not reasonable, they are dangerous. To let them do this is to condemn us.