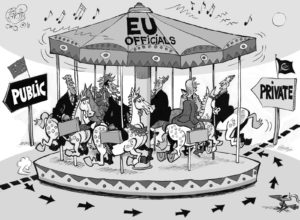 Hydrofluorocarbons (or HFCs) are synthetic gases used for refrigeration, introduced following the banning of their predecessors, CFCs, which were great eaters of atmospheric ozone. HFCs do not have the same nibbling properties, but their greenhouse properties are spectacular and the explosion in air conditioner sales worldwide makes them one of the fastest growing greenhouse gases. The European Commission has drafted a regulation banning their use: they can be replaced by CO2. Problem: HFCs are still patented, whereas CO2 cannot be patented… Their manufacturers (and users, who do not want to change their appliances) have therefore raised an army of at least 353 lobbyists in Brussels to persuade the Commission and the Parliament to let them continue to exploit these very lucrative gases(1).

One more anecdote in the Brussels duck pond? Perhaps, but with substantial consequences, which the media did not mention. The latter, on the other hand, have recently made a big deal of the « Dalli scandal »(2). Do you know John Dalli? You should: this Maltese was Commissioner for Health and Consumers until his dismissal on October 16 in connection with an extortion case involving a Maltese politician and Swedish Match, a Swedish company producing « snus », small bags filled with tobacco (among other things…) that are placed behind the upper lip, banned for sale in the EU but popular in Scandinavian countries where their sale is tolerated. The story goes that this politician asked for an astronomical sum from this company in exchange for pressure on Dalli to lift the ban on the marketing of snus in the EU, as part of a directive on tobacco products to be debated soon by the European Parliament. Shocked (the man is said to have asked for 60 million euros), the Swedish company filed a complaint with the Commission’s anti-fraud service, OLAF, which submitted its report to Barroso and precipitated Dalli’s resignation(3).

Except that nothing is clear in this story: Dalli’s dismissal delays the whole procedure around this crucial directive for tobacco merchants in general (it proposes, for example, to impose graphic-free packages for cigarettes) and one wonders now if he is not the victim of a maneuver by the tobacco industry as a whole. The burglary of several anti-smoking NGOs in Brussels in the days following his dismissal could validate this hypothesis. But it could be something else, such as the need to cover up even more serious facts, as Dalli’s reputation is certainly not that of a fierce opponent of multinationals (his first act as new Commissioner was to approve the GMO potato Amflora from the German chemist BASF). To make matters worse, Dalli is now publicly claiming that he has been sacrificed by Barroso to the interests of industry. Who to believe? The OLAF report has not been made public…

While this is the first time a Commissioner has been fired over a lobbying case, it is commonplace for European Commissioners (and senior officials) to establish close relationships with the companies they are supposed to regulate. In fact, the phenomenon of pantouflage, or going back and forth between the public and private sectors, is omnipresent in Brussels. In theory, any commissioner or senior civil servant wishing to work in the private sector must obtain the favourable opinion of an ad hoc ethics committee. Which has validated… 200 files out of the 201 it has had to process since 2008. In view of the Commission’s obvious unwillingness to take this problem seriously and the accumulation of cases, CEO, together with other European NGOs, lodged a complaint with the European Ombudsman(4).

Will it be enough? Of course not. How can the European public administration protect the general interest when its schizophrenic credo is that only the private sector knows how to manage things properly? This was demonstrated again this month when the Commission finally responded to an open letter we sent criticizing the privatization of water services imposed by the Commission on countries in crisis (Greece, Portugal…) in exchange for European aid, in contradiction with the treaties and the legislation in force. His answer? « The privatization of public companies [water] contributes to the reduction of public debt. […] [la privatisation augmente] The Commission believes that privatization of public utilities, including water utilities, can benefit society when done properly. […] The Commission believes that privatization of public facilities, including water supply companies, can benefit society when done properly. » At the time of remunicipalization of water services(5)To read such nonsense straight out of the golden age of structural adjustment (even the World Bank no longer dares to produce such biased analyses today) is simply mind-boggling. The Commission is coasting, blinded by its ideology and the hope of finally winning a battle it lost throughout the 2000s: the Greek and Portuguese governments on which it imposed this are on their knees, trapped by the financial markets. Nice victory, gentlemen, well done.

One issue that will not have escaped your attention, however, is the Séralini affair, named after the French scientist who released a study showing the catastrophic impact on the health of rats fed NK603 GMO corn and Roundup, the best-selling herbicide in the world. One day we will have to build a monument to the millions of rats killed by science for our protection (hum!), but in the meantime the case has made a lot of noise, if only because of the industry’s lightning counter-offensive. The EFSA, the European Food Safety Agency, which studies the toxicity of GMOs and pesticides, has not given up: the study is worthless, move on. Two weeks after delivering its opinion, it participated in a workshop organized by Europabio, the European biotechnology lobby, on the toxicological evaluation of GMOs. But there, no media scandal, nothing.

Humor is the adrenalin of optimists, as I don’t know which phrase was used. So I can’t close this column without mentioning the « austerity tour », a burlesque and educational bicycle race that took place in Brussels on October 27 in the European district and elsewhere. An opportunity to witness the (measured) efforts and victories (guaranteed by the race commissioner, Herman Van Rompuy) of the Belgian and European austerity barons, and to visit all these places of power, with a smile of derision and determination on their lips. Thank you to the organizers, and we look forward to the next race!