FOR A NEW PROTECTIONISM 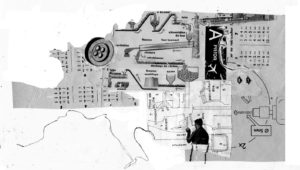 Meat stories, or rather meat trade stories, have been in the news again lately. Last February, it was the case of the beef lasagne marketed by Findus. In fact, it was horse meat that was fraudulently introduced into a very complex commercial circuit. Let’s see: for one dish of lasagne, two brokers, four companies and five European Union countries were involved, including Romania, which legally produced horse meat at very competitive prices, renamed beef in France.

More recently, a new meat story: the Belgian meat sector complains to the Minister of Economy about unfair competition from German slaughterhouses. They use subcontractors who employ underpaid temporary workers from Eastern Europe (Romania, Bulgaria). Belgian Ministers Vande Lanotte and Monica De Coninck have written to the European Commission to condemn a situation they consider unacceptable:  » Germany has no minimum wage and in some sectors employs Eastern Europeans at dumping prices and we cannot compete fairly with them.

These two events cannot be seen as accidents of course resulting from incorrect or dishonest individual behavior. They are in fact the logical consequences of the functioning of a European Union that has enshrined the free movement of goods, persons, services and capital as a priority value (Article 26 of the Treaty).

From the point of view of the guardians of the treaties, there is therefore no need to ask questions: everything is fine. From the point of view of meat consumers and health, it is obviously more debatable; there was fraud in the lasagne affair and it is quite clear from facts regularly brought to light that the requirement of traceability so often evoked is more like window dressing than a guarantee of quality.

From an environmental point of view, one only has to think of the thousands of kilometers driven by trucks along multiple routes to understand that the limit values for fine particles and ground-level ozone set by the European Union are regularly exceeded in most urban areas in Europe. From a social point of view, Mr. Vande Lanotte and Mrs. De Coninck are right to denounce the dumping practiced by Germany. Except that this dumping is perfectly legal and is part of the process of downward pressure on wages and social rights set up by the European treaty. To be indignant about the consequences of the political decisions that one has contributed to have adopted reveals at best a loss of memory, at worst a total hypocrisy, unless one thinks that the signatories of the European treaties do not measure the consequences of their decisions.

It should be remembered that the average wage in Bulgaria and Romania is eight times lower than in Belgium and our closest neighbors, including Germany. Competing in the same area of activity with workers who are subject to such different wage regimes inevitably leads to relocations and to measures of social regression and pressure on wages in countries with high wage levels. The German policy of creating mini-jobs (paid 450 euros per month and affecting 7.5 million Germans) aimed at getting as many people as possible out of unemployment has effectively achieved its objective, but is totally in line with this regressive logic.

It is more than urgent to dare to question generalized free trade today, including within the European Union, if we want to stop the devastating race to the lowest fiscal, ecological and social standards. The first step is to stop demonizing protectionism. Protectionism as a trade policy tool to maintain unjustified privileges or advantages deserves to be fought. But if it consists in setting up ecological and social protection mechanisms, it becomes not only a legitimate but also a useful instrument.

Why not provide for financial compensation mechanisms at the borders of EU Member States to take into account objective differences in production costs? The proceeds of the levies could be used to fund a special European cohesion fund for the less well-off Member States.

It goes without saying that such mechanisms are all the more justified to counter competition from emerging countries such as China or India, where social rights are virtually ignored and environmental protection is non-existent.