Feminism is not always subversive 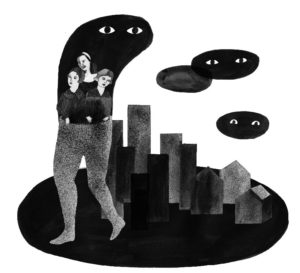 Feminism, a supposedly emancipatory struggle, sometimes takes on the appearance in our societies of an identity-based fight that ignores the collective commitment to a more global change aimed at challenging all relations of domination. This feminism would then be exclusively reserved for women, focused essentially on the relations between them and men and on the themes traditionally associated with them. Would being a woman be a necessary and sufficient condition for a feminism willing to tackle the root causes of inequalities? Paradoxically, couldn’t this type of identity-based feminism serve the inequality deeply rooted in our societies?

Are women fighting side by side for equal pay in their respective professional fields, some of whom are employees of Wall Street and others of Wal-Mart, not temporarily invoking a common belonging — woman — in a fight that has nothing in common? « The average hourly wage for a full-time Wal-Mart employee is (according to the company’s CEO) about $10(1). Working forty hours a week, a Wal-Mart employee therefore earns $400 a week, or almost $2,160 a year. Women, victims of discrimination, earn a little less, men a little more. The difference, according to Richard Drogin, the statistician who analyzed the numbers at the discrimination trial, is (for hourly employees) $1,100 a year. So let’s say that female Wal-Mart employees earn about $20,500 per year. As a result, it would take them 60 years to amass what female Wall Street employees — also victims of discrimination — earn in one year. Of course, male Wal-Mart employees-who are the beneficiaries of this discrimination, earning $21,600 a year-are better off: it would only take them about fifty-seven years to reach that amount. In other words, at Wall-Mart, we have women fighting for legitimate shares of a pie that is so ridiculously small that if they got it, it wouldn’t even feed them. To imagine the women of Wal-Mart as marching shoulder to shoulder with their peers at Morgan Stanley or Harvard to defend their rights is therefore perfectly preposterous, just as it is perfectly preposterous to consider their problem as one of sexual discrimination (2).  »

François Partant expressed the same idea perfectly when he reproached social movements, including the feminist movement, for their lack of unity: « Do women want to transform the society conceived and organized by and for men, by ridding it of all the relations of domination (not only the one of which they are victims), as well as of all the relations of competition that inevitably give rise to them? Or do they simply want to obtain a more equitable place in this society historically organized by men? It is likely that the majority of feminist activists will stick to the latter goal. Their movement was then essentially conservative. As are all the political parties, which now all encourage women to occupy a more just place in society, whose injustice they sometimes denounce. How conservative are the unions, since in the end social struggles can only favor a better insertion of workers in the productive system(3) « .

The feminist movement should therefore not « to allow themselves to be trapped in patently feminist forms of political struggle, such as the demand for parity between men and women in political bodies: if they have the merit of reminding us that the universalism of principle that constitutional law displays is not as universal as it seems — notably in that it only recognizes abstract individuals without social qualities -, these struggles risk redoubling the effects of another form of fictitious universalism, by favouring by priority women from the same regions of the social space as the men who currently occupy the dominant positions(4) « . Feminism, as the tree that hides the forest of these inequalities that affect women and men in an undifferentiated way, can hide the fact that they can be closer to each other than they are within their own category. As Pierre Bourdieu reminded us, « in spite of the specific experiences that bring them together (such as the infinitely small wounds of domination, often subliminal, inflicted by the male order), women remain separated from each other by economic and cultural differences that affect, among other things, their objective and subjective way of suffering and experiencing male domination(5) « .

This folding of feminism under a purely feminine logic, of a fight for the woman which would be self-legitimized by the only fact that the one who carries it is a woman, erasing thus all the different social histories of these women, this folding thus can give place to what Mona Chollet names « a feeling of claustrophobia »: « the question of relations between the sexes, egalitarian issues can be the object, like the values of women’s culture, of a permanent repetition, to the exclusion of any other interest. They can be a means of reinforcing a feminine identity, of insisting on one’s own sexual dimension, without one always knowing very well if it is a question of claiming or of enticing. They allow to curl up in good conscience, under the pretext of militancy, in a set of familiar and reassuring themes. This confusion can be explained by what feminism has become today: no longer, except for a small minority, a militant and collective commitment, but a process of individual reflection, an effort to stand back critically and to raise awareness of those around us(6) « .

badinter as a symbol of consumer feminism

However, in making this criticism of a conservative identity feminism, we are not trying to support a conception of feminism such as the one defended by Elizabeth Badinter, but it should be noted that the former can very well accommodate, and serve, the consumer society that knows a lot about instrumentalizing… women. Concluding — erroneously — from the cultural determinism of the differences between men and women to a possibility of formal equality of a post-modernist type where women and men would be confused as soon as they are able to sell themselves as well on the business and commercial market, the daughter of the founder of Publicis quite logically magnifies the self-made woman. Which, logically, leads him to say: « we mustn’t make fun of the world: it’s not advertising that causes the alienation of women… I like advertising(7) « . Chairwoman of the Supervisory Board of Publicis, France’s 18th largest fortune with $1.4 billion, it is obvious that her legacy and her desire to perpetuate it certainly has something to do with her idea of feminism.

Making women a possible equal competitor to men in a competitive society, she forgets that advertising featuring women consists of selling women to women — without forgetting the women mobilized in the process of productive exploitation of the objects purchased: « we give to consume of the Woman to the women, of the Young people to the young people, and, in this formal and narcissistic emancipation, we manage to ward off their real liberation(8) « . But would she really want them to be free, when Elizabeth Badinter alone accounts for a good part of the wealth of French households?

The femininity of the supermarket, the marketing that feeds on the woman, is however only the apotheosis making her a submissive category: « the male domination, which constitutes the women in symbolic objects, whose being is a being perceived, has for effect to place them in a permanent state of bodily insecurity or, better, of symbolic dependence: they exist first of all by and for the glance of the others, that is to say as welcoming, attractive, available objects. They are expected to be « feminine », i.e. smiling, friendly, caring, submissive, discreet, restrained, even self-effacing. And so-called « femininity » is often nothing more than an indulgence in male expectations, real or supposed, especially in terms of ego enlargement. Consequently, the relationship of dependence on others (and not only on men) tends to become constitutive of their being(9) « .

But advertising, more than the cause of women’s alienation, is first of all a sign, a proof of it; the cause itself of their alienation is their consented reduction to be only « being-perceived » whose qualities are defined through the dominant categories — masculine ones, therefore. « I love advertising, » exclaims Elizabeth. Ready to accept its symbolic domination — whose wounds are undoubtedly less stinging than those suffered by her « sisters » from the lower social strata, her bourgeois position makes her an ideal transmission belt towards these lower social strata who, taking the well-to-do as models, hope one day to become like them. And what better way to begin this dream of ascension than to look like them… and to like advertising too! Badinter is thus assured to have with her a cloud of consenting women, sitting in their certainty of being the emancipated descendants of those, « submissive », who preceded them, without perceiving that this past alienation has been substituted by another.

There would be a way to differentiate a true emancipatory feminism from a big box feminism: « an infallible way to be sure that, at the moment when we think we are giving in to feminist activism, we are not wallowing in consumerist individualism, nor confirming domination by repeating the themes to which women have been assigned: to get out of feminine or feminist issues. At least from time to time. Investing in fields common to both sexes, but most often monopolized by men, and challenging their hegemony on their own ground(10).  »

Feminists who reduce feminism to identity and femininity can therefore be faithful servants, consciously or not, of our societies that have set up money and appearance as supreme values. By erasing the differences that exist between women, and the similarities between some of them and men, they institute them as pure individualities without history that would be capable — if they only wanted to… — to be the equal of men.

But for what changes?