Exceptional procedure with and without state of emergency 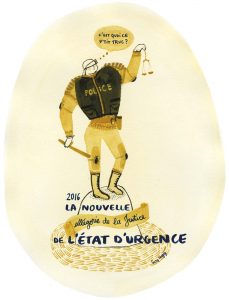 In less than two years, France has seen an inflation of anti-terrorism laws: the Military Programming Law in 2013, the Law Strengthening the Provisions Relating to the Fight Against Terrorism of 2014, and the Intelligence Law of June 2015. This series of texts, promoted by the socialist government, have led to a considerable retreat from the rule of law. As for the law of November 20, 2015, it extends, for three months, the 12-day state of emergency, voted the day after the November 13 attacks in Paris. It has been extended again and expires this May 26(1). The state of emergency generalizes exceptional penal procedures that strongly reduce public and private liberties.

Manuel Valls denied the liberticidal nature of the law, saying that « the state of emergency is the rule of law. It is paradoxical to invoke the rule of law to justify the extension of 3 months of a procedure that has no other objective than to free itself from the principle of separation of powers, to liquidate the judicial power and to concentrate all prerogatives in the hands of the executive and its police. Since the beginning of the state of emergency, most of the administrative searches conducted have been for law enforcement purposes, for example, on environmental activists, or for ordinary law enforcement, with no connection to the fight against terrorism .

The state of emergency is already contained in the 1955 law, a piece of legislation that allowed the French government not to declare a state of siege during the Algerian war and, thus, not to consider the resistance fighters as combatants in order to treat them as criminals. Compared to this law, the conditions of house arrest, decided without the intervention of a judge, are tightened. The 1955 law applied to any person « whose activity proves to be dangerous »; it now applies to any person « with respect to whom there are serious reasons to believe that his or her behavior constitutes a threat ». The wording is much broader and unclear because « serious reasons » are not specified. By shifting from  » activity » to  » conduct » and  » presumption », the new law abandons the materiality of the facts and moves closer to a crime of intent.

The house arrest is applied in a place that is not necessarily the home. The suspect can be taken there manu militari. The law thus opens the door to the formation of camps following the preventive administrative internment of people on the S list, approximately 10,000 individuals who have never been convicted.

Night-time searches, without judicial authorization, may take place if there is « there are reasonable grounds to believe that the place is frequented by a person whose behaviour constitutes a threat. « They call into question the inviolability of the home and can take place for vague reasons that are detached from any material element.

The possibility of preventing any meeting on the public highway for « security reasons » during the state of emergency has already made it possible to prohibit the cancellation of the large demonstration that was to be held in Paris on November 29, the day before the opening of the United Nations Climate Conference (COP21).

EMERGENCY PROCEDURE WITHOUT A STATE OF EMERGENCY

Under an accelerated procedure, the National Assembly has just adopted on March 9, the new penal reform bill « strengthening the fight against terrorism and organized crime ». The text brings into the common law, provisions considered as part of an exceptional right, without the state of emergency being declared. It also provides a judicial outlet for the  » surveillance  » procedures legalized by the Intelligence Act.

The bill considerably strengthens the prerogatives of the prosecutor, a magistrate strongly dependent on the executive power. The prosecutor conducts « preliminary investigations », in which he or she has the power to refer the suspect to a court. Then he brings the charge in a trial he initiated. In the oven and in the mill, he will also have to verify if the  » investigations carried out by the judicial police are well carried out in charge and in discharge ».

However, as far as the judicial police are concerned, the control of this magistrate remains purely formal. In France, the Public Prosecutor’s Office is particularly overwhelmed. Prosecutors are few in number and handle the vast majority of court cases. The new powers given to the police in this bill will only increase the workload and make it impossible to monitor the work of the police. The latter is in fact the big winner of the reforms.

The executive branch cannot control the work of the police through the prosecutor. The judiciary is totally incapable of doing this through the other figure, put forward by the bill, that of the liberty and custody judge, on whom most of the authorizations to implement the provisions of the law are based. His control can only be formal, because this judge does not have access to the substance of the file.

Thus, in matters of terrorism and with the prior authorization of this magistrate, night searches will be authorized in homes, as of the preliminary investigation. From now on, they can be carried out in a preventive way, based on the possibility of a danger.

The use of IMSI-catchers, these false relay antennas that spy on telephones and computers without the knowledge of their users, will be authorized by the judge of freedoms and detention or « in urgency » by the prosecutor, knowing that it is the police itself that names what is urgent. Video surveillance, image capture and sound recording of a home can now be decided upon during the preliminary investigation, after a simple authorization from this magistrate.

As in the state of emergency, the prefect sees his action reinforced. From now on, he will be able to place « returnees from Syria » under house arrest for a month, ask them for their phone and computer codes, force them to report their movements and forbid them to talk to certain people. This provision has the attributes of a judicial procedure, but it is an administrative act, a control without a judge that leaves all the room to arbitrariness. It does not give the suspect any opportunity to confront the charges. It is the attributed intention that is attacked, without the person being able to defend himself.