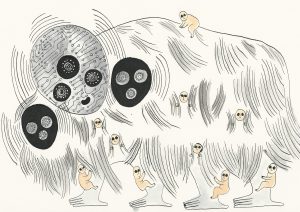 There is an objective coherence, more or less hidden, behind the apparent chaos of this « world in motion », and to which the technocratic power — through its multiple political, state, economic, scientific, media channels, etc. — has given rise. — we are required to « adapt » — or disappear. It is to update this coherence that the Parts and Labour survey has been working for the past twenty years. Here is a summary presented at the Technologos conference in September 2019 in Paris.

First, a little technology update. The 5G ultra-high-speed wireless connection network is deploying its antennas. The transhumanist entrepreneur Elon Musk is sending 20,000 satellites circling the earth’s sky for this purpose. More than 1,000 « smart cities » are being planned worldwide, half of which are in China. France is testing Alicem, a smartphone-based » government digital identity solution  » with facial recognition authentication, to dematerialize 100% of public services by 2022.

The smart city is the product of digital technology and metropolization. The technocrats announce it as a fait accompli: 80% of the world’s population will be crammed into metropolises by 2050. Hence the imperative of a rational organization of public order, that is to say, of a police force for populations, in the sense of management and discipline, optimized by a centralized and automated control. This is the only way for the city-machine to fluidify its networks, its flows and stocks of goods and individuals, to avoid blockages and breakdowns.

The mathematician Norbert Wiener had theorized it at the end of the war: the human being is the error; his erratic decisions must be replaced by a machine-like and rational system, cybernetics from kuber in Greek, « pilot ». Fed by data from all sectors of urban life, the  » governing machine « , as it was named by Le Monde ‘s science columnist Pierre Dubarle in 1948, produces the single best technical solution.

The city dwellers of 1948 (except for Orwell) might have considered the idea fanciful. The Smartians of 2020 have adapted to digital functioning: interconnection of their communicating objects, sensors and chips disseminated in the furniture and urban environment, networks(smartgrids), transport ticketing systems, video surveillance cameras with facial recognition and license plate reading; « recommendations » from algorithms to guide their choices and their daily lives; modification of their walking speed according to the affluence according to the principles of fluid mechanics(1) Triggering automatic devices based on data collected and analyzed in real time (number of smartphones captured on a given street, behavioral anomalies in public spaces, occupancy rate of public benches, analysis of energy consumption in real time, etc.).

Here is thus accomplished the design attributed by Engels to Saint-Simon (1760–1825): the  » replacement of the government of men by the administration of things « . No longer individuals, but « profiles »: what a gain in efficiency for the smart city pilots.

Smartians are the passengers of their own lives as well as of their autonomous car. Mother Machine takes care of everything, at the cost of a technologically constrained existence. In the original meaning of the term: streig » to tighten  » (Indo-European root), stringere, constringere in Latin:  » to bind closely together « . The electronic net has tightened in 20 years, to the point that no metropolitan citizen can escape it. The pancraticon (from pan - everything and cratos - power), a device of quasi-omnipotence over beings and the world, is the new organization of the public order(2). The organization of Saint-Simon(The Organizer, 1819), itself extrapolated from the humanorganism (etymology: orgoutil, energy, work). And one of its contemporary avatars is the cyborg, the cyber-organism conceived by Nasa and celebrated by the techno-feminist Donna Haraway.

The originality of this totalitarianism is that it needs no coercion to impose itself. The technological putsch , permanent and invisible, is carried out in the name of « progress », convenience and now « ecological transition ». Artificial intelligence will save the planet, as the macronist mathematician Cédric Villani trumpets. While waiting for this miracle, it first allows the « dematerialized » administration of the population and the disembodiment of power. No threat to the  » body of the King  » (Kantorowiz). On the « intelligent planet », the citizen-number has no interlocutor («  Type 1  ») and cannot oppose anyone.

The superficial ecologist only protests against the nuisance of 5G, whose frequencies will fry the residual neurons of Smartians and accelerate the 6th extinction of living species. No doubt. But the only criticism of 5G’s health plagues spares incarceration in the machine city. The eternal blunder of those who run on the lure of nuisances and ignore technological totalitarianism. We don’t want a constrictor net that is guaranteed to be  » harmless to health « ; we don’t want to be functional, working components of the machine-world.

No « smart planet » without 5G, the missing link in the overall interconnection. According to the European Commission’s 5G Action Plan, these networks are designed to connect one million objects per square kilometer. Take an island of 20m by 50m in your city; to count a million communicating objects, you have to add to the smartphones and various screens to almost every element of the scenery: vehicles, cameras, lights and street lamps, buildings, bus shelters and urban furniture, store cash registers, pavements, dustbins, robots, household appliances, clothes, meters and urban networks (water, energy, heating), etc. As Arcep, the French communications regulator, says, « 5G should act as a facilitator for the digitization of society . » Translation: the Smartian can no longer make a gesture that is not captured, analyzed and anticipated by the algorithms. The machines know his habits, act in his place, and he finds that very convenient. Meanwhile, he immerses himself in virtual reality movies and games downloaded in less than a second. Here he is freed from the worry of living, thinking and choosing.

All the machine-men ask is that we don’t hurt them. What we want is not to become machine-men. It is therefore from a political and anthropological point of view that we must attack the society of constraints and the smart city.

As always, the proponents of the « reappropriation of the means of production and distribution », in the first place the communist Saint-Simonians, defend the idea of a  » good cybernetics  » and of a  » good use  » of the  » governing machine « . Computer-assisted ecological planning, as Mélenchon would say. Socialism and cybernetics merging for a rational collective organization.

The experiment was tried under the « Chilean socialism » of Allende in 1972. It was called Cybersyn (« cybernetic synergy ») and was entrusted to the British cybernetics theorist Stafford Beer, former head of United Steel and the International Publishing Corporation(3). Cybersyn’s objective: to manage the « communized » public sector in a rational way, i.e. centrally under technocratic direction, while feigning  » worker participation  » in the planning process. It is thus a question, sempiternally, of resolving the irreducible contradiction between elitist technical expertise and collective political will, by means of a technopolitical machine.

Beer and his engineers connect 500 telexes in companies to a central computer in an operations room, where data on the status and operations of companies flow in daily. TheOp-Room, located in the center of Santiago, is equipped with screens projecting data from the factories and analyzes them live to make the right economic decisions. The « Cyberfolk » device should also measure the people’s satisfaction live, thanks to boxes allowing them to express their state of mind from their living room. Thus, we can calculate the gross national happiness as we go along, and adapt the centralized steering of the country to fluctuating realities.

Alas, the socialist Chile of 1972 lacks data sensors, wireless networks and supercomputers. Pinochet’s coup d’état on September 11, 1973, ended the cyber-socialist experiment, but not the project. With the big data and the Internet of Things, horizontal e‑government projects are emerging with new vigor among accelerationists(4)the « negroes » of the magazine Multitude, and other high-speed communists, for an equal and citizen participation to the self-machination of the human species, thanks to theopen data, to the collectivized management of data centers, satellites and nanoelectronic chip factories.

THE MEANS OF POWER

Lyon, Dijon or Karamay in Xinjiang are not designing their smart cities in participatory workshops but according to the recommendations of engineers from Atos, Thales, Bouygues, Suez, Capgemini, Orange or IBM. Pilots are needed to control the cybernetic systems, to define the indicators, to design the algorithms, to program the machines. By the way, we are looking for  » embedded software engineers  » (starting salary: 35,000€), IoT (Internet of Things) designers , and the Ecole des Ponts is partnering with the Paris School of Engineering for a smart cities training.

The administration of the machine-world relies on experts, the technocrats, masters and owners of the means and machines (in Greek, mêkhané, which means machine, ingenious invention, trick.., from which machinismo, machinery, machination). But one will see of course procedures of  » co-construction  » and  » technical democracy « , such as the current Citizen’s Comedy for the Climate, so that the citizen herd participates, and flattered by its participation, accepts and defends its own machination.

Machines are means (synonyms: process, instrument, plan, trick, manner, expedient, cunning, calculation, maneuver, ability) and means are machines. The machine is a means to an end: power, power, it is a machine of all power. Sicut dei : the machine is the means to give itself the supernatural forces of the gods. God says:  » Let there be light  » and thanks to his performative word the light is. The Smartian says: « OK Google, turn on the light  » and thanks to the machine/medium, the voice assistant obeys.

Aristotle uses other terms,  » instrument « ,  » worker « ,  » slave « , as means and/or machines for a purpose. In his time, workers and slaves were needed because of the lack of machines. There is an equivalence between humans and machines, between life and function, and therefore humans will be ousted as soon as machines arrive. For example, robots, according to the word coined in 1921 by the Czech playwright Karel Capek, from the Slavic root meaning work. This anticipates Wiener’s cybernetics, artificial intelligence and the city-machine. Indeed, we no longer need slaves, workers, or individuals capable of deciding for themselves. The machine does it so much better.

Technocracy, the class that merges knowledge, wealth and power, has the means to enslave the world to its will, to act on matter and nature, this  » non-organic body of man  » (Marx), to make itself  » master and possessor « . The current stage of this transformation is the incarceration of the man-machine in the world-machine. The technological boom produces both the  » smart planet  » and its variations, connected objects, big data, smart city, smart home… and the transhumanist project of human self-machination. Both connected by the smartphone, while waiting for the body implants that will optimize the social organization of the cybernanthropes.

We know about the two-speed medicine, here is the two-speed self-machination. On the one hand, supermen with performances enhanced by their technological prostheses and their genome improved in the laboratory; on the other hand, the cyber social insects of the city-machine, dependent on their connection to the central control, to their technotope, to function. The Saint-Simonian, techno-progressive left claims machination and self-machination for all, taken care of and administered by the public power. Thus this page of Le Monde diplomatique, alerting its readers in its January 2020 issue, against the privileges of  » the genetically modified rich  » in the United States. These warnings reflect the ambitions of the small technocracy, of its lower strata (engineers, technicians, managers, academics), worried about wresting from private capitalists the monopoly of technological eugenics. Let the techno-progressives be reassured. In China and all over the world, in start-ups and laboratories, companies and universities, with the support of the state, public money and private money, geneticists, biologists, physicists, computer scientists, cyberneticians are working hard to incarcerate the machine man in the machine world.