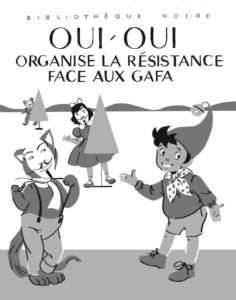 In our highly « digitized » countries, censorship has little reason to exist: human beings allow themselves to be manipulated without realizing it and without knowing exactly how it happens. Before reaching this point, our societies went through various stages, starting with pure and simple censorship, which went as far as the « redaction » of articles or novels judged not to be in conformity — in the French prisons of the 1970s, the inmates received press cut out by the hacks, who must have spent a lot of time there! Then there was self-censorship, which we will focus on for a moment, before coming to the current mode of conscience control.

Self-censorship was and remains particularly visible in a sector that should have rejected it outright: publishing for young people. For the past twenty years, important subjects have been taboo, such as pornography and politics. However, the vast majority of adults, including « politicized » ones, recognize that the pornography freely available on the web and with which children have to deal from the age of seven or eight has very serious consequences on their emotional and sexual life, and generally on their evolution. Thus, sexism is not about to disappear; nowadays, in French high schools, young girls complain first about sexism, even before violence or injustice.

Politics is the other main taboo subject in children’s documentary (and in fiction, too). There are very few books for young people on, say, the strike, the revolution, rebels, ecology in the political sense of the term, or peace, violence, etc. However, these themes are of interest to young readers — it is enough to organize a debate in a secondary school to see this, on the condition that speech is allowed to be free, and therefore that there is no censorship, which the National Education Department does not accept at the ministerial level(1).

Self-censorship is simply born from these observations: since some subjects are taboo or so complex to talk about that it is better to talk about something else, let’s talk about something else. And everyone builds a reassuring explanation: in any case, these young people will not vote before they are eighteen, they will have plenty of time to get interested in politics. Or, « It’s so hopeless that it’s not worth talking to them about the state of the world, politics and geopolitics. »

Now, however, the issue of censorship has taken on a much more ominous character, with the control exercised over the lives of connected people by what Shoshana Zuboff calls « surveillance capitalism.(2). It is our actions, our thoughts and even our emotions that are under control, and make grandpa’s censorship obsolete. Through the masses of data that connected people leave on the web, through their queries on search engines, their emails (which are analyzed by the keyword filter), their « likes » on social networks in particular, and their reading choices (again on social networks, and everywhere where such a choice exists, for example what one looks at on Amazon), these people trace a very precise image of themselves. But beware: it would be quite wrong to believe that because you write « So-and-so is a bastard » or « I’m going on vacation to Africa » that you are drawing a portrait of yourself. No: it is mainly through our way of reacting to this advertisement, to this photo, to this e‑mail, according to the time our reaction takes, the length of our message, written with or without exclamation marks, etc., that is to say thanks to everything that indicates our emotions and feelings, that the « surveillance capitalists » that are Google, Facebook, Amazon, Samsung, Microsoft and many others, analyze our personality.

Not all of them work in the same way. Google relies on a very powerful search engine, from which it sucks our personal data through Android, Street View, Google Now, Google Home and so on. Facebook is ahead in facial identification, and has been for several years — the photos that Facebook asked « friends » to « tag », i.e. indicate the name of the person seen in the photo, allowed this police company to accumulate the largest terrestrial file of photos: every day, the two billion people connected to Facebook post 350 million photos; no cop could have hoped for such a file, which is digital, and therefore extremely easy to access The facial recognition rate achieved by the digital tools developed by Facebook is equal to and even slightly higher than the recognition rate of humans themselves(3).

FROM PURCHASE CONTROL TO VOTING CONTROL

At first, this control of our impulses, this knowledge of our feelings and desires served — and still serves — to guide us towards purchases. Google and its competitors are making millions by charging for the « clicks » that people make on a particular product ad. This is the  » pay per click advertising  » method: the advertiser pays according to the clicks of the Internet users(4). The link with censorship? You have to go through the history of these companies, Google, Facebook and others to understand this. In the 1990s and 2000s, these start-ups were « drowned » among dozens and hundreds of others in Silicon Valley or elsewhere in Asia and Europe. If they have emerged and often become quasi-monopolistic in a field, it is first of all because they have developed a very powerful tool. It is then because they produced, at the very time of their development, the theoretical and even philosophical tools that would allow them to structure their method of accumulation (of data and money). Thus, Google, born in 1998, took off thanks to a search engine that was much more efficient than its competitors, but from the mid-2000s, it was the « personalization of results » that established its power. Almost all Google users have never read the explanation about the personalization of results, which is a subtle form of censorship and all the more serious because it is misunderstood and invisible. For the last fifteen years, in schools and during conferences for the general public, some of us have been explaining the dangers of personalizing results; it must be admitted that if this convinces a part of the audience, the vast majority of them continue to use Google, maintain a Facebook page, a Twitter account, etc. So they continue to « innocently » deposit the data that allows these companies to control their purchases, and now their opinions, votes, and so on.

Our votes? Eric Schmidt, former CEO of Google and now an expert to the Pentagon, acknowledged in the 2010s that he significantly helped Barack Obama in his two election campaigns in 2012 and 2016 through digital means, allowing him to know what his potential voters would like him to say and announce(5). Our emotions? Shoshana Zuboff details how companies, born out of the Massachusetts Institute of Technology, have created tools of extreme finesse, initially to decipher the emotions of autistic people, for example, but these tools, generalized to the entire population, come to allow the exercise of almost perfect control over us all(6). There is not much left to censor: (almost) everything is known and can be used; everything can be manipulated. Everything is under control. Not quite, though…

Herbert Marcuse, in One-Dimensional Man (1965), asserted that the one-dimensionality of the capitalist world implies that any alternative solution vegetates, as if in a state of dormancy, in the depths of this system. Why censor, when « the fear of liberation », in his words, leads us not to try to move away from the reassuring frameworks proposed by capitalism? Of course, the world has not really evolved in this respect; for example, almost everyone still uses Google, a fine example of practical one-dimensionality. What has changed is the immeasurable mass of data accumulated in Big Data, which makes it possible to control us all the more effectively since most of us are proud to be in the mainstream, according to the axiom « I don’t care if Google or Facebook know everything about me because I have nothing to hide. » So why censor again and again, if everything is going so smoothly? Our explanation is a double hypothesis.

It is probable that some, among the rulers, still have the desire to censor because they have not understood what is being put in place, without them. Thus, Schmidt, again him, stated in 2013 that  » The internet is among the few human-built works that humans do not really understand(7). « This is not to take certain governments for idiots, but let us note that this policy does not come from them, that it is the work ofprivate companies that have themselves constructed the « rules » of the virtual world, outside the States. This paradigm shift is so huge that some « traditional » governments probably refuse it.

Second hypothesis: it is always useful for a State to make people believe that everything continues as before, that censorship does not hold in the process we have just outlined, that all this is just hogwash and… conspiracy, and to continue with the good old scapegoat policy. Because it is always useful to have a scapegoat on hand. However, with « traditional » censorship, the scapegoat is designated. These are the « hidden people » who do not fit into the « technology ecosystem » — again, these two expressions are from Schmidt(8)one of the new gurus of digital totalitarianism. As another web guru, Mark Weiser, said:  » The most accomplished technologies are those that disappear. They weave themselves into the fabric of daily life, until they are indistinguishable from it(9). « It seems to us that the most efficient censorship in 2021 is the one that, at the base, conditions and controls the opinions of the connected people.