CATASTROPHES, APOCALYPSES AND OTHER CHAOS. WITHOUT FORGETTING THE SURREALISM… 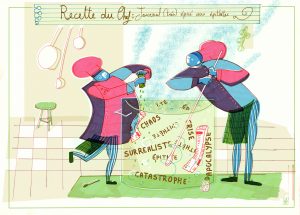 We can’t escape it. It’s impossible to escape it; they do it on purpose. And if they don’t do it on purpose, « it’s even worse than worse, that’s saying » (to be read in one go and without moving your ears). In short, as we said at the beginning, there is no escaping it. To this press — newspapers, radios, television — which, on all occasions but never the best, makes abusive and even outrageous use of these calamitous epithets for the sole purpose of impressing and terrorizing readers, listeners and others slumped in their sofa in front of the inenarrable face of de Brigode. Or someone else, it doesn’t matter. Three centimeters of snow, traffic jams at the entrance of the capital, the closing of a tunnel in the center of our beautiful and inescapable capital, a murderous attack here or there, a train derailment or a plane crash (the opposite is extremely rare) and here they are, all of them, writing, saying at the microphone or in front of the camera and with tremors in their voice, that the situation on the roads is apocalyptic, that chaos reigns there or elsewhere; in short, that at every turn and in every circumstance, it is almost the end of the world.

A prospect that is increasingly raised by scientists who study the countless warnings about the climate and the environment. For his part, the whimsical new president of the United States of America considers that this whole business of climate change is a joke in bad taste, the sole purpose of which is to harm the ambitions of this great and beautiful country, which has 10 million poor and uprooted people of all kinds, Obviously, this is neither a catastrophe nor a scandal but, more prosaically, an effect of the ineluctable and natural course of the immemorial struggle between the members of the human community, which is, in this respect, a cousin of all the other animal species whose law is « eat or be eaten ». However: herbivores and other ruminants escape this terrible and cruel adage; we have never seen the green pastures threaten to devour those of the animals that feed on them. By the way, let’s remember that Adolf Hitler was a strict vegetarian and that he didn’t drink alcohol or smoke horrible cigarettes.

To return to the calamities of our country, we can say that we have been well served, recently, with the Publifin affair, about which hectolitres of saliva, ink and sweat have been poured out, and we have just about seen a real tsunami of a « surreal » nature; here we are. Poor André Breton ; he who saw in the movement of which he was one of the inspirers, a way of revolution, of questioning the old utilitarian rengaines, of upheaval of the manners, of liberation of the spirit and the practice of the poetry under all its forms, here that the name of what was to be a vast construction site of demolition of the old world became one of these cream pies semantic that the scribblers and other beautiful public speakers and paid by him, use wrongly and through to illustrate benoîtement the limits of their poor understandings. Now, don’t count on the person responsible for this column to rant on about this painful case of embezzlement and banditry. The press, for once almost unanimously, made a big deal of it and will surely come back to it for a while. The time that the citizens cuckolded in a masterly way digest little by little the bile of disgust that has risen to their throat and that other turpitudes are, one day soon, the object of their good attention.

For the rest, and as the author of these lines is used to, we will not end this talk without evoking the enchanting climate which reigns these days in our dear neighbors of OutreQuiévrain (another cream pie of our patent copyists) where we have witnessed some very incredible and crunchy adventures; in the center of

Once again, we find the comrades of the socialist party, as sadly and pathetically null as those of our country. These have given a beautiful spectacle of incompetence and petty tricks during the first round of primary of The « beautiful popular alliance » it is allowed to sneer and of the diffusion of its results; these have been signaled by their perfect hypocrisy and their confected faces of virtuous repentance in the Publifin affair and derivatives, posture that suits them so badly.

And, to finish, it would be good if a large part of the opinion would come to demand the resignation of ALL the political staff of this Belgian town, in all the federal and regional assemblies; that they get out, ALL of them! But that’s not likely to happen anytime soon. Although, you never know, nothing is more unpredictable than the popular masses. Nevertheless, this year we commemorate the centenary of the Bolshevik Revolution…

Post scriptum : It is the ugly copycat of JL Mélenchon, Benoît Hamon, who won the socialist primary. And this little guy is not far from claiming to demand that the leader of France Insoumise pledge allegiance to him. What’s wrong with your head?