Brussels: the war of the shopping centers 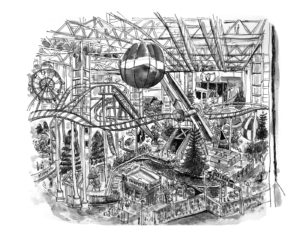 Since 2005, commercial megaprojects have been pouring in. The Walloon Region is particularly involved, but Brussels is not left out: the Just under the sky project (55,000 m²) led by Equilis along the canal that crosses the capital, the Neo project (72,000 m²) led by the City of Brussels further north, and the Uplace project (53,000 m²) led by Bart Verhaegen, president of FC Bruges, just across the border from the Brussels Region, in Machelen. This means a total of 182,000 m² of additional retail space, even before accounting for the recent revitalization of the Anspach and Toison d’Or shopping malls, the Tour et Taxis project and new retail developments in the train stations.

The project for a mega-shopping center in the north of Brussels was first mentioned in the Schéma de Développement Commercial pour la Région de Bruxelles-Capitale (2006), a study that has long remained a ghost (2) but carried at arm’s length by the regional Minister of Economy and Employment Benoît Cerexhe, to justify the realization of a new shopping center in the North of Brussels.

Interests converged, and a year later, the Brussels Region adopted its International Development Plan (IDP) (3), which provided for the construction of a 100,000 m² shopping center on the Heysel site. The City of Brussels, owner of the land, applauds with both hands. On the site, it plans to create a new 5,000-seat convention center (4), which should contribute to the city’s international reputation. This equipment is considered expensive and not very profitable, but it doesn’t matter because the shopping center should make the whole thing profitable — according to what calculation, we don’t know. This project, called NEO (5), is managed by a limited company, EXCS, headed by Henri Dineur, former chief of staff of the current Minister-President Charles Picqué. The Government Agreement 2009–2014 seals the pact between all the parties of the majority(6). In 2012, the regional government is working hard to amend its Regional Land Use Plan (RLUP) to allow the project to proceed, contrary to the current plan.

No discordant voice, except that of a few isolated politicians, to denounce this waste of public land for a speculative project. The competition between territories that plagues our regions is pushing each of them to outpace the other, ignoring any consideration of possible complementarity. Just across the regional border, in Machelen, a short distance from the NEO project, another consumer monster is waiting for its time, the Uplace project.

THE SHADOW OF UPLACE

Uplace (7) is a 190,000 m² project combining retail, leisure and office space. As an anecdote, revealing the logic of urban marketing, Uplace is sold in Flanders as a Flemish project but abroad as a Brussels project « Uplace Brussels ». Its promoter hopes to attract 25,000 visitors per day, which according to Touring would cause 4 km of additional daily traffic jams. The Flemish government is bound to the project by an agreement dating from 2009, before its installation, which it has never wanted to denounce, despite the heavy criticism of the project by the province of Flemish Brabant and the neighbouring municipalities, which fear for the congestion of their roads and the survival of their commercial districts. Despite these criticisms, the project has now obtained all its permits, the latest being the one issued in May 2012 by the Minister of the Environment. The project seems to be the first on the finish line in this race against time but it is riddled with appeals (8)The latest is the Brussels Region, which has lodged an appeal with the Council of State against the Flemish strategic development plan in which Uplace is included. In particular, Brussels criticizes the Flemish for not taking into account the impact of this project on mobility in and around Brussels (9).

The backlash was to be expected: Uplace in turn is taking the NEO project to the Council of State and plans to file a complaint with the European Commission for non-compliance with public procurement law.

We can only hope that these anti-social, anti-urban and anti-environmental projects will kill each other but.…

WHILE THE GIANTS ARE AT WAR, THE LITTLE THUMB ADVANCES

Next to NEO and Uplace, there is a third shopping center project in this territorial pocket: the Just under the Sky project located along the canal in front of the Royal Estate. While all eyes are on the two giants, this project is making its way with the full support of the City of Brussels. The latter seems to see this as a Trojan horse: if Uplace is built before NEO, at least there will already be a new shopping center in the north of Brussels to overshadow the first. While this project is smaller in scale than the other two, it is no less destructive. Its developer, the Equilis group, the real estate arm of Mesdagh (10), hopes to attract 155,000 visitors per week, 70% of whom will come by car. It is already known that the project will involve the use of a significant part of the capacity of the adjacent road (middle belt), which is already saturated. In addition, the construction of the shopping center implies the destruction of the former Godin warehouses (11), one of the oldest legacies of the city’s industrial past, whose French twin brother, in Guise, has been preserved (12).

The adjacent shopping centers need to be careful when we know that the first application for a socio-economic permit included exactly the same signs that are already present everywhere in Brussels. The public authorities talk about complementarity but, in fact, they have no control over the signs that will come to settle. This is even more true since the implementation of the European Services Directive prevents public authorities from taking into account the risk of competition in the commercial fabric. Regulation by the free market, that’s the only way to go!

The project has just received its two permits in the middle of the summer: the urban planning permit and the environmental permit, rolling out the red carpet to be the first of the three projects on the finishing line.

Since our leaders are playing promoters and think that we have nothing better to do than to turn ourselves into perpetual consumers, it is up to us to react.

It is in this sense that, for the past three years, the Interregional Platform against Shopping Centers (13) has been constantly monitoring the progress of these projects and trying to block them. It is also in this sense that, very recently, the Collective « Dites 33 » (14) in Brussels intervened in a joyful way to hijack a General Assembly of the company Delhaize.

And it is always in this sense that other mobilizations are organized so that the war of the shopping malls is not done on the backs of the people.