AND IF WE STOPPED BELIEVING IN REASSURING FABLES? 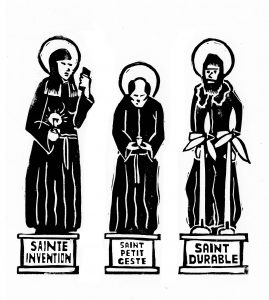 After a long period of denial, global ecological imbalances are becoming more and more evident and scientifically confirmed. Climatic accidents have exploded in recent years; confirming the impression that each of us feels, natural disasters have indeed been 15 times more numerous in the 2000s than in the 1950s.

In addition, the recent WWF report shows that the Living Planet Index, an indicator of the state of global biodiversity, shows a decline of 39% for terrestrial species between 1970 and 2010, 76% for freshwater species and 39% for marine species. The area and integrity of natural habitats in most parts of the world continue to decline. All over the world, the water tables, which are used by humans to the tune of 734 km³ per year, are showing signs of depletion and the majority of rivers are in a state of crisis.

To face these ecological challenges, unprecedented in the history of humanity, we are confronted with three types of discourse that are more like reassuring fables than proposals for action.

These three fables are:

Like all fables, they tell beautiful stories that we want to believe because they make us feel safe and do not require much effort or reflection, but they have nothing to do with reality.

Optimists, who believe in a science that has all the answers, trust an external force to answer ecological problems they do not understand. Their attitude, while claiming to be rational, is deeply irrational. Heirs of Descartes, who saw man as the master of nature, they do not understand that by acting on ecosystems and the living world, we provoke uncontrolled reactions that can lead to results opposite to those sought. A good example is fertilizing the oceans to mitigate climate change. By dumping nutrients into the seas, where the concentration of phytoplankton is low, it is hoped to increase this concentration and consequently the sequestration of CO2. Experiments of this type carried out over the last 20 years have produced disappointing results: fertilizing the ocean to sequester CO2 has proved less effective than expected and the disruption of the marine environment has been so disturbing that a moratorium was adopted in 2008 on this type of technique by the Convention on Biological Diversity.

In fact, there is never a simple technological answer to an ecological problem, which is complex by nature. Any strictly technological response generates a new problem that is often worse than the initial one.

The second fable, that of the « small gesture to save the planet », suggests that everyone can change things through concrete daily gestures: not letting the water run from the tap when brushing your teeth, turning off the lights when you leave your office, or putting on an extra sweater rather than turning up the thermostat by one degree when you are cold. All this is nice and relevant and does not deserve any discredit. On the other hand, trying to sensitize our fellow citizens by limiting ourselves to this kind of words has the main effect of letting them believe that the sum of individual actions is the right answer to the current ecological challenges, as if collective action was useless and political leverage non-existent. Moreover, if at first, this fable can seduce, it appears very quickly as derisory for someone thoughtful. It therefore has a demobilizing function, no doubt involuntary, but all the more disturbing because it obscures the socio-economic and political mechanisms involved.

Finally, the third fable, that of sustainable development, is the most pernicious because it is carried by all decision-makers in the world. It is therefore an official fable, endorsed by the scientific community and the multinational environmental protection agencies, but it is still a fable. Sustainable development is defined as a type of development that meets the needs of the present without compromising the ability to meet the needs of future generations. In fact, it is a seemingly responsible and generous concept that skips over the essentials in order to spare everyone and, in reality, to change nothing. It ignores the finite nature of resources, cautiously refrains from questioning the needs that must be met, and refuses any idea of self-limitation. It trusts the market and free trade, as imposed by the rich countries, and relies on technological innovation to ensure the virtuous nature of economic development. Even though the word development has become a plastic word, it clearly means in this context a continuous growth of economic activity and, as a consequence, a growth of the artificiality of ecosystems and way of life.

However, it is this growth dynamic that depletes resources, pollutes and destroys the common goods that are biodiversity, the air we breathe and the water we drink. Maintaining the illusion that the objective of economic growth in countries that are already over-consuming the planet’s resources is legitimate and beneficial, under the banner of sustainable development, is a suicidal mystification for all humanity.

It is logical that, more than 20 years after the Rio Summit during which the Conventions on biodiversity and climate were adopted, the situation has continued to deteriorate and the global ecological footprint has not stopped increasing under the impulse of the rich countries which have not changed their mode of production-consumption.

It’s time to forget the reassuring fables and to acknowledge once and for all that the consumer society is not sustainable. The opportunity is now present in developed countries to get rid of our addiction to growth since there is no more growth. Abandoning the objective of growth and aiming at improving the quality of life together is essential from now on if we want to have the slightest chance of achieving the stated objectives in terms of climate protection, biodiversity and the fight against poverty.