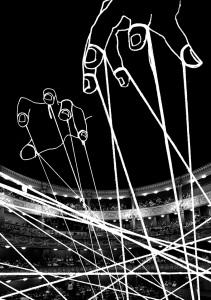 » A perfect society, listen to me, liberal friends, a perfect society is one where dogs do what they are told! Where there are no strikes! Where political parties don’t come on TV to butter our skates! Where immigrant workers are here to work and not to stuff themselves with couscous or codfish! Where terrorists must be banned! Where the rich must be happy to be rich and the poor happy to be poor! Where everyone must be united against everyone else!… »

Luis Rego’s plea at the « trial » of Jean-Marie Le Pen at the tribunal des Flagrants Délires on France Inter, in the early 80s.

A few weeks before the publication of this fourteenth Kairos, thousands, even millions of us, all over Europe, have cast ballots in favor of such and such a person, such and such a party, representing the vast range of political formations that claim to be excellent and that, at the present time and whatever the major trends that have emerged from the elections, are preparing the future in general and ours in particular. In this respect, there are many reasons and motives for a widely shared skepticism among voters that prevailed at the time of the dreary, distressing and often, even, distressing electoral campaign conducted by the tenors of the « major parties ». And, most certainly, this skepticism and distrust of the political elites will continue to prevail if not increase at the time of the small and large arrangements and other reversals of jackets that we will inevitably witness. We have read and heard, throughout the electoral campaign, the pathetic appeals of some and other « big names » to the mobilization and seriousness of voters, summoned to make the right choice by trusting only those who were in business and who, hand on heart, committed themselves to repair the few unfortunate snags that occurred to their unwillingness, of course! during their term of office; the near future will show more than certainly that the promises, as always in this area, engage only those who make them.

But what will be observed first and foremost is that, in what took the place of a program in the three Themajor parties — PS, MR and Cdh — are completely absent from the major questions concerning the environment, global warming, the depletion of fossil fuels, among other challenges that we should finally begin to address. Instead, some political leaders have come up with their scurrilous miracle recipes to get rid of the cohorts of lazy people, profiteers, and other welfare recipients while elsewhere they were bickering about the ugly airplanes that prevent the people of Brussels from enjoying their right to sleep, but none to call for thinking of anything else than relieving the air traffic from Zaventem to Charleroi and Liège: sinister André Antoine, poor soft-headed moron… For the rest, we will have appreciated the verbal gesticulations of the leaders of the so-called socialist party and its union organization warning the unfortunate future voters against the small parties - one in particular — that threatened the unity of the left and could only benefit the right-wing and its inevitable future anti-social activities; let’s laugh a little. But, even more than the leftist threats, it was, for the « traditional » French-speaking parties, another serious danger that threatened and of which the convenient spectre was waved: a triumph or a tidal wave of the NVA in Flanders that could only generate the worst difficulties and, after almost everyone had let it be known

the refusal and therefore the impossibility of reaching an agreement with Bart de Wever on any subject whatsoever, it is the Belgian federal state that would inevitably become absolutely ungovernable if not wiped out. By the time you look at this page, there is no doubt that, from this point of view, we will have already witnessed, on one side or the other, these denials and changes of course dictated by the realpolitik , which we know does not bother with moral principles or with commitments to which only the naive are bound. The professionals of the public thing, from fathers to sons and from mothers to daughters, will still give in the near future all the measure of their lowliness and their ignominy and « things », good year, bad year, will still go their little way while waiting for one or the other catastrophe to occur; social, institutional, natural, nuclear, we have only the embarrassment of the choice. One thing is sure, the Big Night is not for tomorrow morning nor for the day after and we must rather expect a long and fatal sequence that will see the world transformed for the worse rather than for the better.

However, there is no lack of good intentions; the debates of ideas, the forums, the meetings, the exchanges that take place outside the institutions and on the bangs of the traditional parties, the proposals and the putting forward of what it would be necessary and sufficient to set in motion to initiate the change and to open up audacious perspectives that are discussed on the social networks books, newspapers, magazines and « blogs » that are not under orders and where those who are trying to shake the old coconut tree express themselves, all this can delight and comfort the faithful readers of our esteemed and persevering newspaper. But, alas, and I hope I will be forgiven for saying so, wherever my eyes turn, everything continues; within the ridiculous little borders of our pathetic kingdom and beyond, from the most distant regions to our close neighbors, I see everywhere nothing but despondency and disillusionment, wars, famines and massacres, fierce repression of any form of contestation of the dominant disorder. I only hear the voice of the powerful, relayed and amplified by the media, which drowns out the complaints and recriminations of those hungry for bread and justice. Here, in public places, in the streets and on public transport, I only see closed faces bent over the screens of the latest cell phones; from far and wide, a smile, the beginnings of an exchange: a few words and then it’s over already, too quickly. And these poor guys, younger and younger, more and more numerous, who are dumped, cut off from everything and who wander around begging for a penny, a cigarette. Other than that, everything is fine! They have not stopped saying it and repeating it, these regional excellencies and others: everything is fine! The economy is better, there is a kind of shiver of recovery, investors are investing, unemployment is falling, we are shown as an example, we are on the right track. Idiots!

But come on! Do not despair Billancourt, comrade columnist! There is still the chance of that little thing, here or there, somewhere else, which would cause the tiny spark, which would sneak into the little pile of twigs that would offer a few sparks, which would become flames, which would light the beautiful fire. But we are pressed for time, the days of this world, of this civilization, even, are numbered and those who are its owners and sole managers do not even seem to be aware of this obvious fact. And, as a consequence, the political leaders, elected or not, who do everything to please their masters, share with them an equal insouciance in front of the disasters caused by their crazy ambition to dominate the totality of the world and the miserable shadows that would then be the multitude of those who move, live and die there.